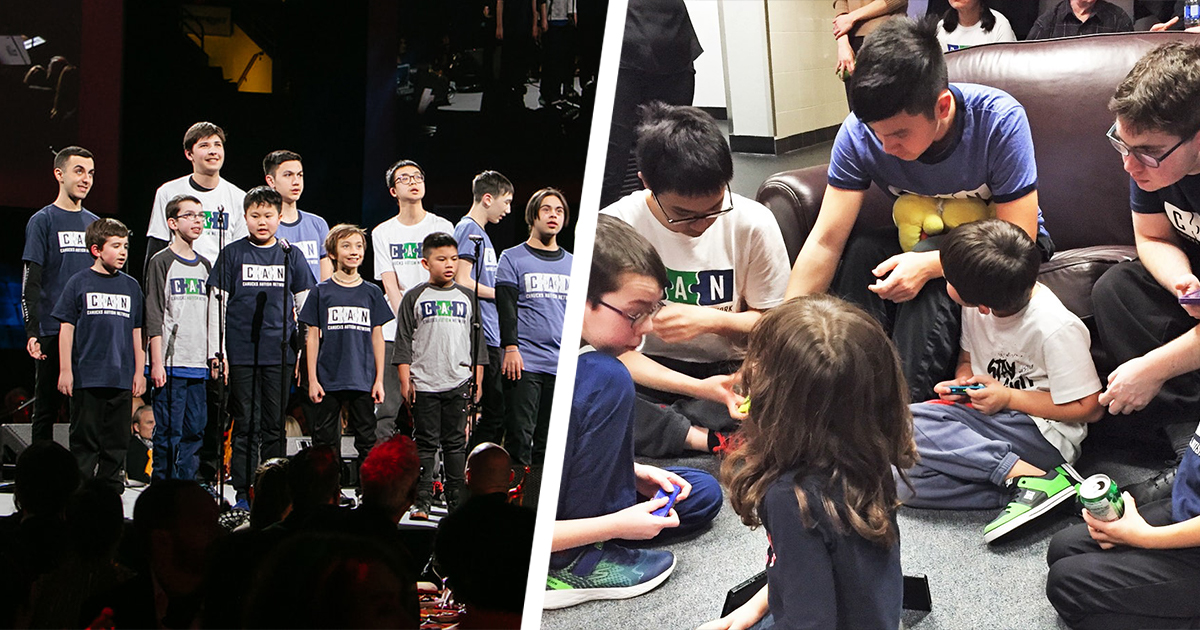 On February 1, the home of the Vancouver Canucks was transformed into a circus-style ‘big top’, for REVEAL, The Greatest Show on Earth, in support of Canucks Autism Network (CAN). Presented by BMO Bank of Montreal, the unforgettable gala dazzled some 566 guests with awe-inspiring circus acts, impressive culinary creations and show-stopping musical numbers.

But the true stars of the evening were the 15 CAN members of the Sarah McLachlan School of Music choir who performed a touching rendition of “This is Me” from The Greatest Showman.

Based on the reactions among the guests, it’s safe to say the choir’s five months of rehearsals paid off.

“These kids really touched me,” said CAN Founder Paolo Aquilini, when he later took the stage. “That is why we’re here. So that these kids can say ‘This is me’ with empowerment.” 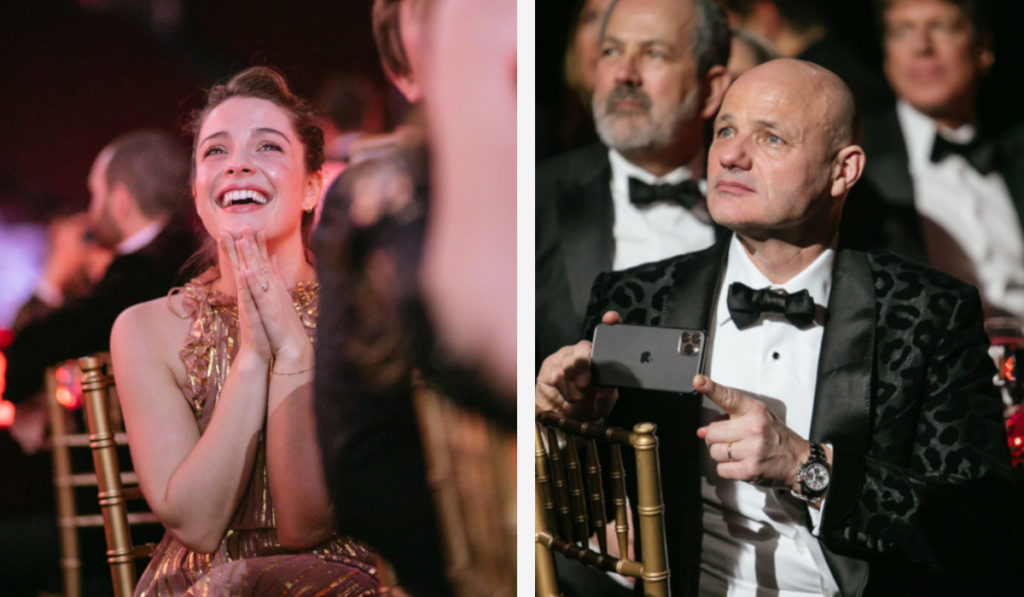 The Good Doctor star Paige Spara and CAN Founder Paolo Aquilini react to the performance.

Gavin had the honour of singing the final solo. “I was a little nervous in front of all those people,” he said after the show. “But I remember everyone cheering after my part and it made me feel really proud of myself. I thought about my family and how my mom was going to have happy tears!”

The performance was an unforgettable moment that reminded all guests firsthand of the impact of their generous contributions.

But behind the scenes at Rogers Arena, something else truly magical transpired.

In preparation for their performance, the choir had arrived early for a rehearsal. With a few hours until show time, the group was designated one of the dressing rooms backstage.

Unstructured time and ‘waiting around’ can be difficult for any group of kids. But it can be especially difficult for those with autism. CAN staff and parents came ready with activities and a plan to keep the group occupied for the evening.

Anita Rudge was one of those parents.

And nearly two months after the Reveal Gala, she is still as excited about the performance as she is about what she witnessed backstage. 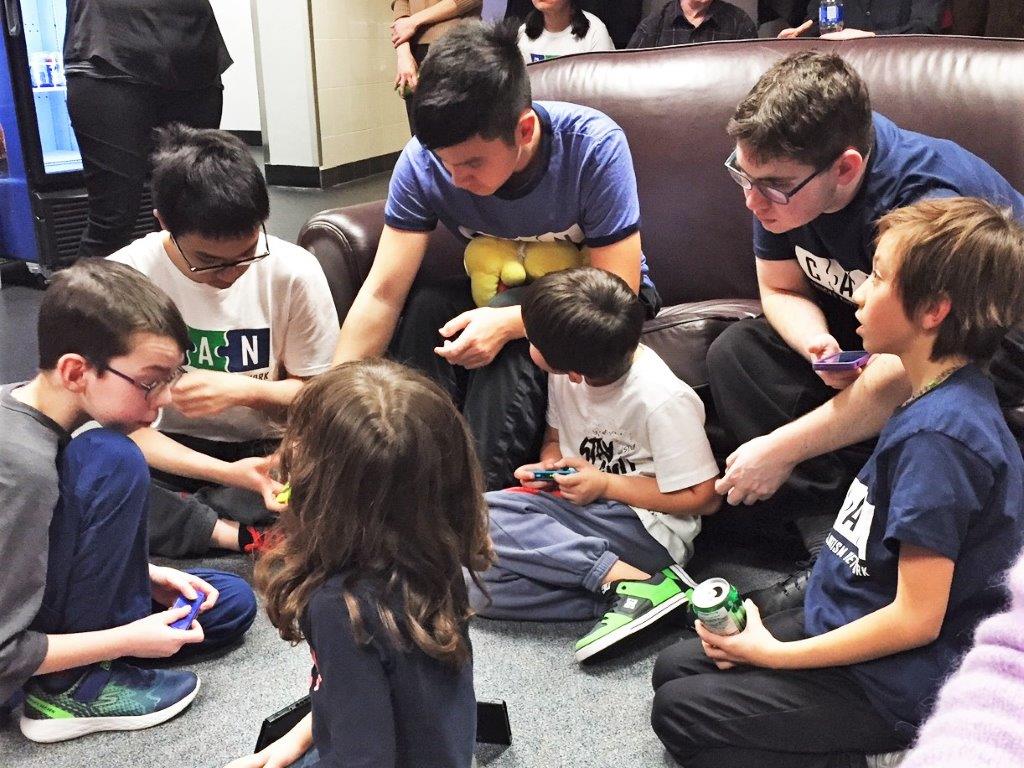 “I remember the rehearsal being stressful. But once we got backstage, the kids were joking with each other and laughing,” Anita recalled. “They were sharing their Nintendo Switches and playing board games. And for kids with autism, it can be so hard for them to engage socially.”

“It was one of the happiest moments of my life.”

One of CAN’s staff, Sarah Armstrong, was also in the room. “The group varied in age and background quite a bit, but they came together like any group of friends would,” said Sarah. “They were comforting each other before their big moment on stage. It was unforgettable.”

The four-minute performance featured two solos and one duet. Anita’s son, Jayden (right), had the opening solo. Gavin (left) had the final one.

If you look closely during Gavin’s solo, you’ll notice that Jayden is singing along word-for-word. 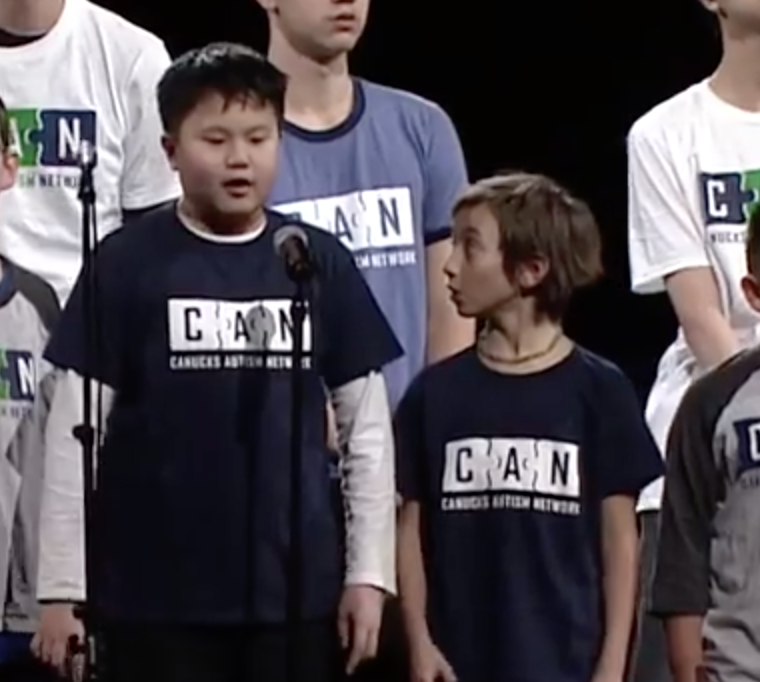 That’s because, right before the performance, Gavin had asked Jayden to sing along with him — just in case he forgot the words.

“As a mother, you want your kids to be kind and empathetic,” Anita said. “These kids loved and supported each other.”

On stage, Jadyen, Gavin and the entire choir proudly sang the words: “I’m not scared to be seen, I make no apologies – This is Me!”

The lyrics acted as a powerful reminder to guests that we need to increase understanding and acceptance of autism in the community at large.

The fact that so many people gave so generously at the Reveal Gala is cause for great hope.

But the moment that took place backstage provided profound hope of its own. It proved that a mutual love for music could bring a group of kids and youth with autism together.

And that in the process of singing for acceptance, the group found understanding among each other. That’s something you simply can’t put a dollar figure on.

“They were all hugging each other to say goodbye after the performance,” recalled Anita. “It was a room filled with so much love and understanding.”

“It gave me hope that if it can happen in that room, why not everywhere?”

Finding Kai’s voice with CAN & Sarah McLachlan School of Music

Return to the CAN Blog

Learn more about the Reveal Gala

Learn more about the CAN & Sarah McLachlan School of Music program