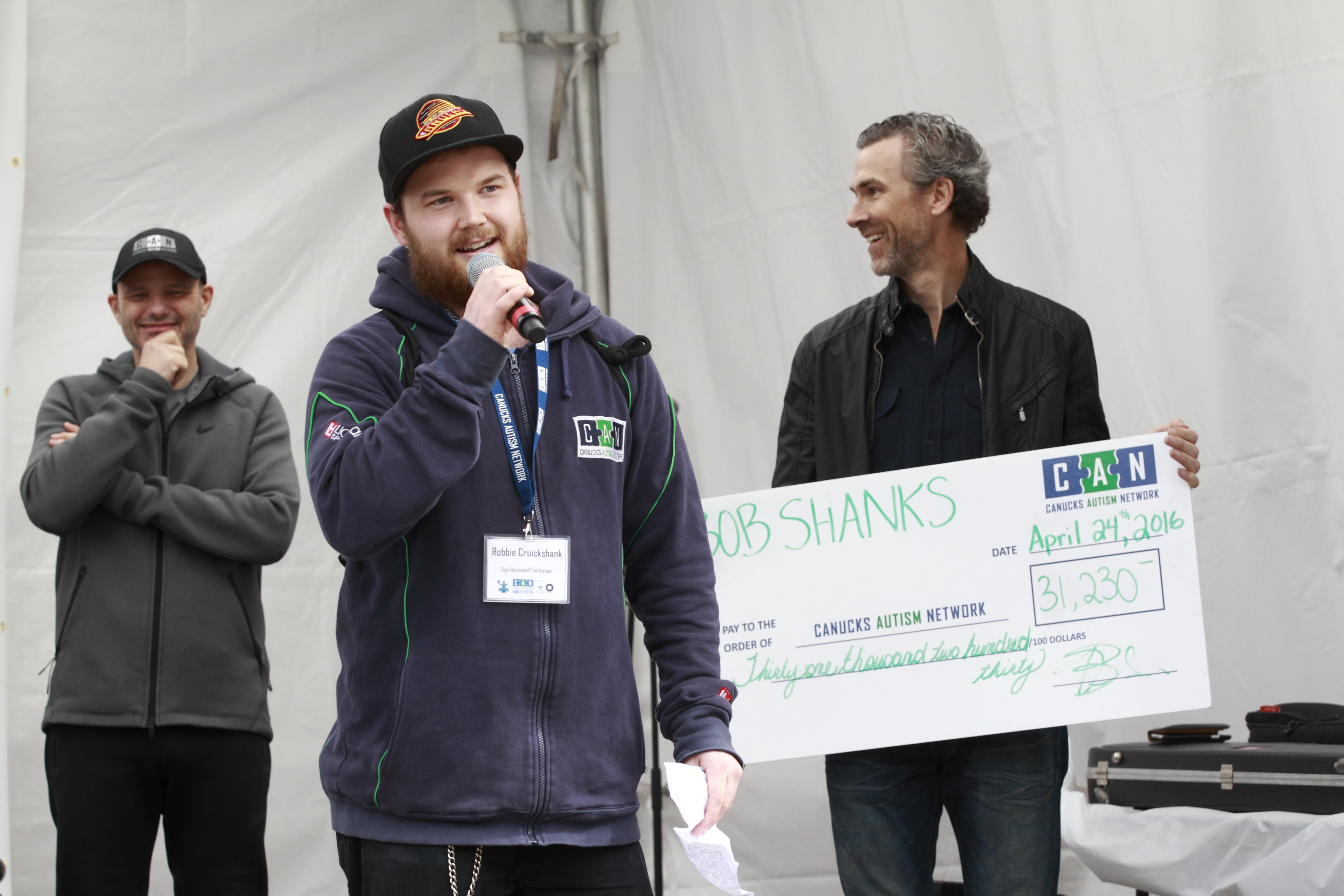 This article was originally published in January 2018. Since then, Bob Shanks has raised ANOTHER $100k is nearing his goal of a quarter million raised entirely by himself for CAN. Incredible!

Each year, Canucks Autism Network (CAN) delivers over 450 sports and rec programs throughout BC. Ranging from weekly sports lessons to single-day family events, CAN programs impact over 3,200 individuals and families living with autism on an annual basis. But each program and event is only possible with the generous support of those who share our passion.

In 2012, Robbie Cruickshank, a young adult diagnosed with autism, had just heard about CAN. “My sister, Diana, was good friends with someone from the organization who was involved in fundraising,” Robbie recalled. “Being a huge sports fan, I was motivated to support CAN’s programs. I love hockey, football and basketball — both playing and watching.”

Most importantly, Robbie loved the idea of helping kids with autism play these sports too. He began simply by collecting donations from his family. Better known as “Bob Shanks” to those closest to him, Robbie began expanding his fundraising efforts. For five years, Robbie has hosted pub nights, spearheaded online campaigns and even gone door-to-door to support CAN programs.

“Pretty much any time I wasn’t working,” Robbie told us, “I was fundraising for CAN.”

With years of dedicated fundraising under his belt, Robbie set his sights on a truly astonishing milestone in 2017.

This past September, Robbie reached and obliterated that goal. His most recent total? $113,763 as of early-January.

Five years. $100K. ✨ Cheers to Bob Shanks’ incredible fundraising efforts to support families living with autism in BC. The evening even included a surprise visit from Kirk McLean! ➡️

But as inconceivable as it is for one individual to raise $100,000, the amount is not nearly as important as the passion that Robbie shares with CAN.

When asked how he could have accomplished something so incredible, Robbie answered simply, “I just tell people how it is at CAN – where the money is going and what the organization does.”

A couple of years ago, Robbie visited the I CAN Play Sports program, where he helped teach a participant how to shoot a basketball. “I told him, ‘Shoot it like you’re putting your hand in a cookie jar’ and he made the basket!”

For Robbie, seeing the joy that sports gives each child is what continues to motivate him. “I do it because these kids get to experience something that may not be possible without CAN.”

With over 11,000 families living with autism in BC, the need for help is greater than ever. Regardless of the amount, every contribution counts.

Thank you to Robbie and all of our supporters for sharing CAN’s passion. We could not do what we do without you.

To learn how you can support CAN programs, please visit canucksautism.ca/support.

If you would like to support Robbie’s ongoing fundraising efforts for CAN, please visit our online donation page and be sure to enter “Robbie Cruickshank” in the comments field.