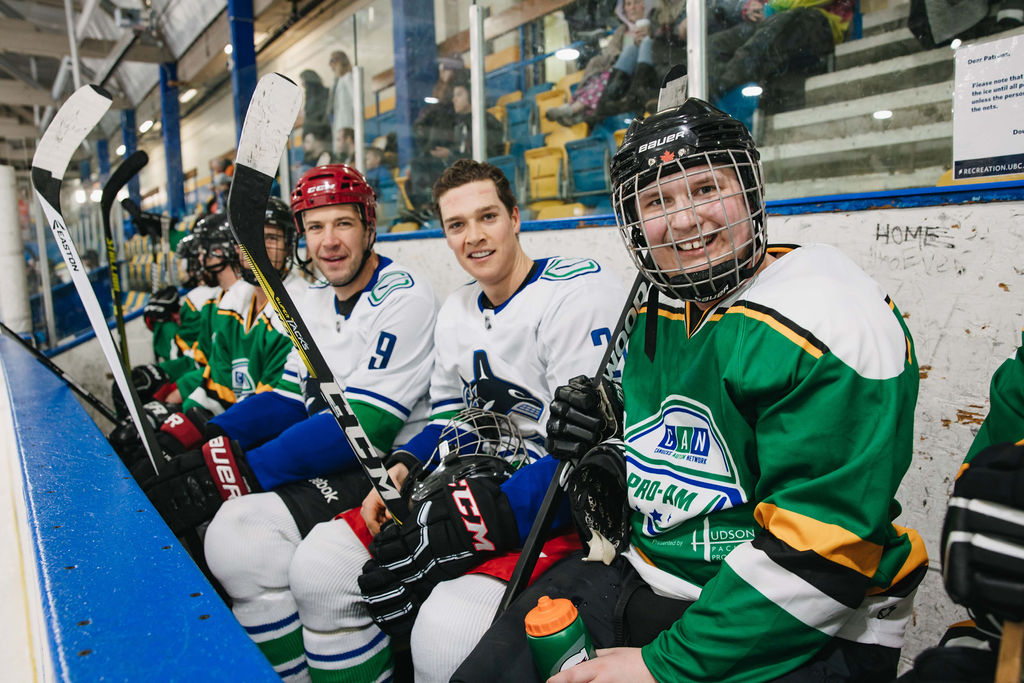 I first got involved with Canucks Autism Network (CAN) as a participant in July 2018. My nana really wanted me to go out and do something, so she took a look at CAN programs. We found one of the monthly social outings, and it happened to be at Castle Fun Park in Abbotsford, right next to home.

Since then, Brayden has participated, volunteered and worked with CAN. Watch his speech at the Canucks Dice & Ice Gala this past February!

That year, I heard about the inaugural CAN Pro-Am, a hockey tournament to raise funds for the programs I participated in. Rec and corporate teams got to pick an NHL Alumni to play on their team for one weekend.

Being a big Canucks fan since 2011, of course I wanted to play.  But at the time, I wasn’t old enough and I was playing my last midget hockey tournament in Lumby, a small town near Vernon, that same weekend. 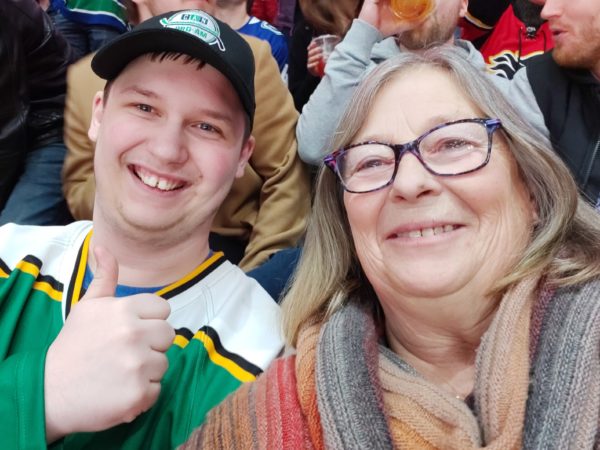 My nana registered me and told me that I had to raise the money myself – and I did.

There were 19 rec and corporate teams signed up for the 2020 CAN Pro-Am, presented by Hudson Pacific Properties. CAN helped organize a team comprised of CAN parents, staff, volunteers and supporters, called the Healthy Scratches. Brayden joined this team for the 2020 tourney.

Instead of asking for money for Christmas, I asked my relatives to make a pledge to my fundraising campaign.  They helped a lot, and I am grateful for their support.

My nana and I also attended a Lions meeting in December.  We made an oral presentation and were surprised at the generosity of the people at the meeting; I doubled my fundraising total in just one night.

Sometimes I even took bottles and cans to the recycling depot to add more to my total.

Lastly, I was also volunteering with the new CAN Hockey program in Coquitlam.  Imagine my surprise when I found out that my volunteer hours gave me a fundraising bonus too!

After months of fundraising, Brayden absolutely smashed his fundraising goal of $1,500, bringing in $2,250.

As a team, the Healthy Scratches raised an incredible $43,369. Ranking 6th among the 19 teams, they earned the right to play a pre-tournament exhibition game at the home of the Vancouver Canucks. 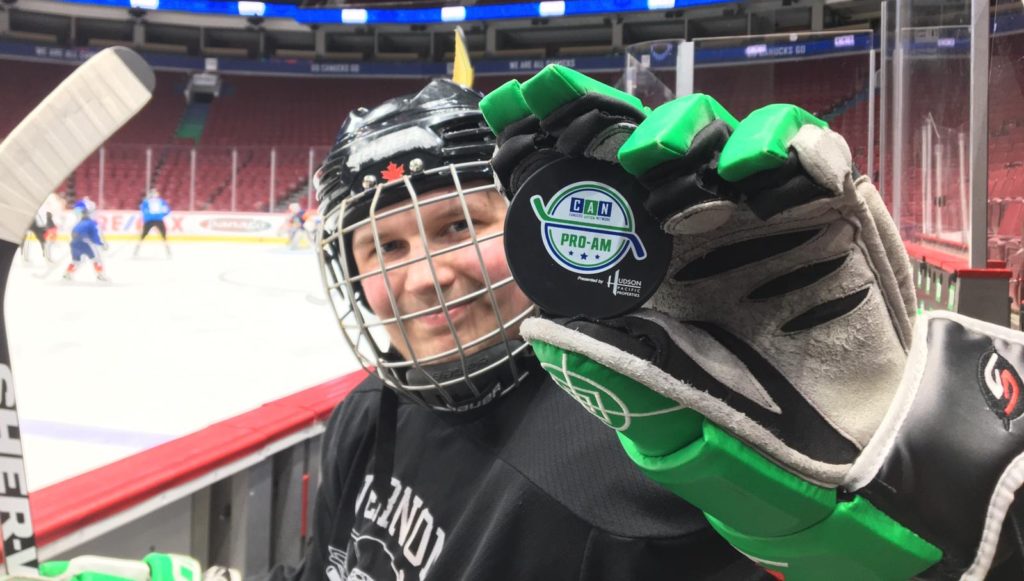 The tournament experience started on my birthday, January 22. Who would ever imagine playing in Rogers Arena on their 19th birthday? It was a funny game for me. I was wearing gloves that were too big for me, but I still managed to get two assists in that game. I felt like I got some of my old groove back.

It is difficult to describe my pure enjoyment at Draft Night in a single emotion. My team came up with a vote for drafting.  We eliminated Todd Bertuzzi and the Sedins as possibilities, because we knew they would be the first three drafted. We narrowed it down to two players: Canucks Alumni Brad May and Mason Raymond.

After Bertuzzi and the Sedins were chosen, Brendan Morrison and May went 4th and 5th. So our decision was made for us. We welcomed former Canucks winger Mason Raymond onto our team. Based on how the tournament eventually went, I believe that we may have come out with the best pick in the draft. 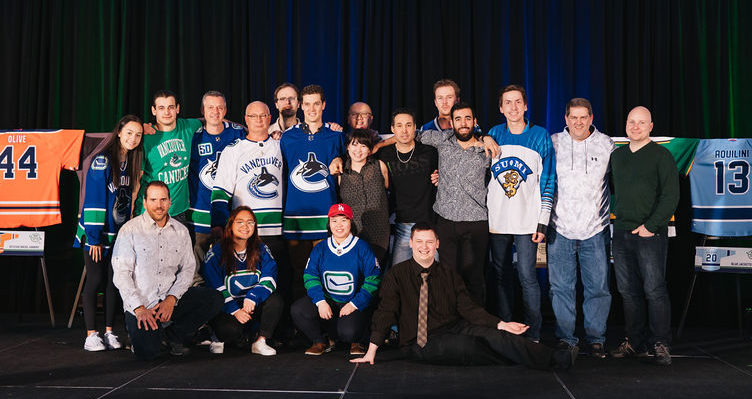 The next morning, it was time to drop the puck! The 2-day tournament took place at UBC Doug Mitchell Thunderbird Sports Centre. Each team gets two games on Saturday and one game on Sunday.

The whole tournament was one big highlight. On day one, Raymond kept setting me up, but I just could not score. Although we lost both of our Saturday games, we were all having fun, and that is what mattered most.  We got a laugh out of Kyle Wellwood’s cherry-picking against us. And taking a faceoff against Geoff Courtnall was something I never thought would happen.

When we weren’t playing, I hung out with a few members of the team in the player’s lounge overlooking the main rink. We watched the Sedins face off against each, and it was a blast.  They went one-on-one at the start of each period. I felt bad for the goalies!

We had our last game the next day. It was something else. While we were getting ready, we made a few trades with our opponents from First Brew – a team of first responders and microbrewery staff from Port Moody. Taylor Pyatt ended up joining Mason Raymond as a second NHL Alumni on our team.

The second period was where the game really took off.  I never thought in my life that I would score a goal assisted by both Raymond and Pyatt, but the CAN Pro-Am makes scenarios like this possible. I do not miss wide open nets often.

After scoring another goal, Brayden had the opportunity to score a hat trick goal on a penalty shot!

Any penalty in this tournament results in a penalty shot. And during the third period, a call was made. I went wide-right and put it five-hole. Everyone cheered.

After the game, I was asked by CAN for an interview and to my surprise, both Brad May and Henrik Sedin walked up to congratulate me. When Brad May says you scored the goal of the tournament – well, I just could not stop smiling all day. 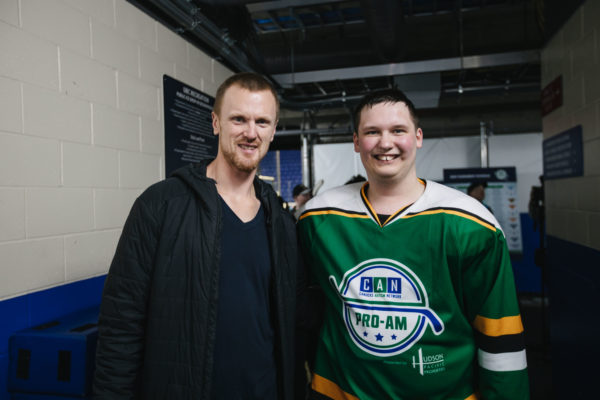 But the fun was not over yet.

One of the highlights of the tournament is the All-Star Game. The top 22 fundraisers get to compete in the showcase match alongside 12 NHL Alumni.

Before the game, one of our top fundraisers told us he couldn’t play anymore. He wanted to give his spot to a deserving player. Naturally, we offered it to Brayden! 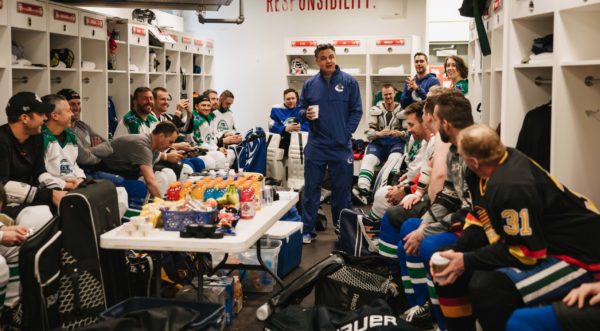 I had to race to the All-Star teams’ dressing room. I was surprised when Canucks coaches Travis Green and Nolan Baumgartner came in to give us a speech.

One of the kids on the CAN youth hockey team in Coquitlam, Michael, also came in to thank us for our fundraising. He dropped the ceremonial puck for the game, which was very nice to see. If you are reading this, Michael, I hope you enjoyed the game, buddy! 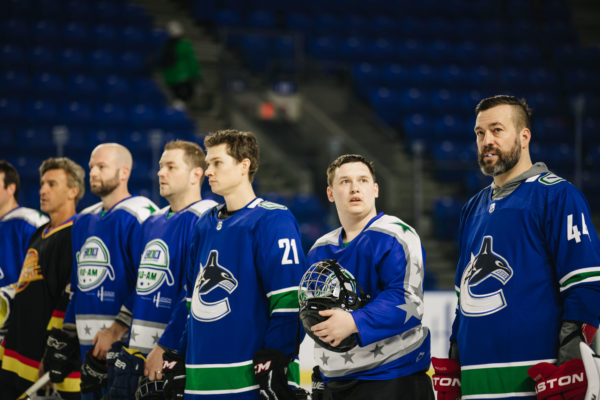 There were a lot of great moments in this game. I had a very short board battle with Henrik Sedin, which I knew I would lose. But it was still great. Watching former Canucks goalie Corey Hirsch take a penalty shot was awesome as well; no one expects a goalie to pull off a one-handed shot!

I happened to score another goal during the game. This one resonated with me more than any of my previous goals, because my team was down by two. We still lost 4-3, but plenty of memories were already made.

I have been to the U.S. for a Peewee tournament. I have played against teams from Alberta. And I have been on a tournament-winning Bantam team. But this was easily one of the best weekends of my life. 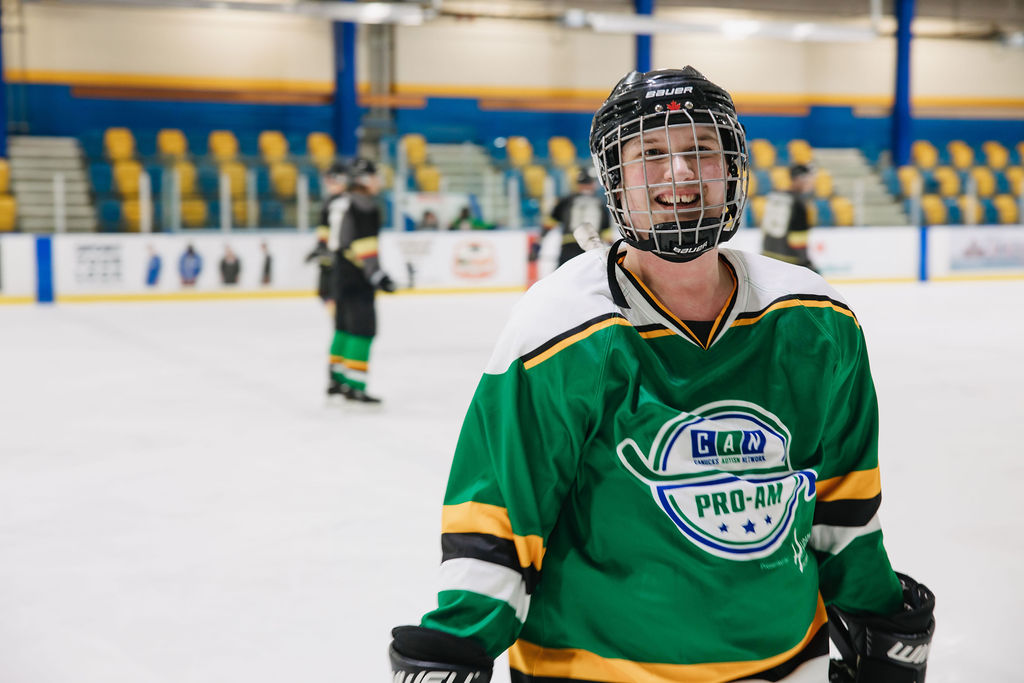 I want to say thank you to everyone who made this tournament so amazing: the NHL Alumni, my teammates, and especially the volunteers and staff. Without these people working so hard and taking the time out of their days, it would not have been so amazing.

I can’t wait to be back next year.