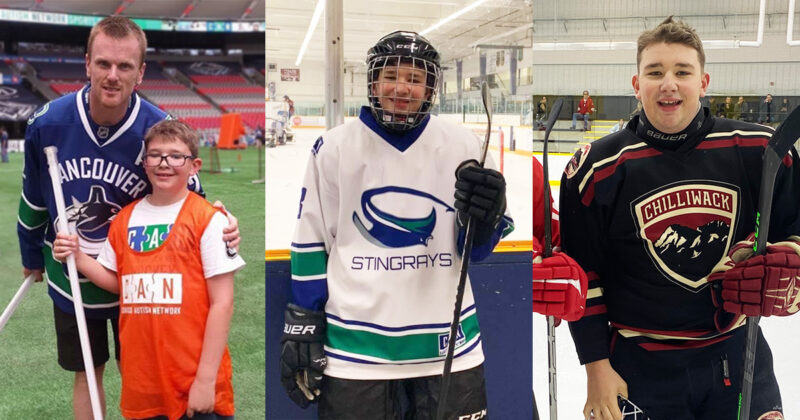 This speech was delivered by CAN dad Gary Bryant at the 2022 CAN Pro-Am Luncheon, sponsored by ICONIX Waterworks.

Our family’s story is about a young boy with a passion and a dream. It’s about how Canucks Autism Network (CAN) paved the path that allowed our son Mitchell to break many barriers with the seemingly endless support of the most amazing and dedicated staff and volunteers I have ever seen.

Hockey has touched every single corner of our lives as far back as 1999. I played. Both of Mitchell’s older brothers played. And I coached their teams for 12 years. So naturally, from the moment Mitchell could walk and he was able to hold anything that resembled a hockey stick, Mitchell was “playing hockey”.  Mitchell showed an unusually strong passion for the game. As you can imagine, we were all very excited to get Mitchell involved in this wonderful game as soon as he was ready. 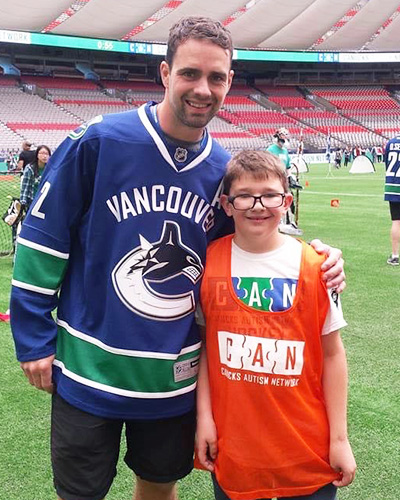 Mitch with former CAN Ambassador and Canucks defenceman Dan Hamhuis in 2014.

Mitchell was introduced to the sport at the age of 5 with minor ball hockey. This was Mitchell’s first real experience in a structured environment. He did not socialize with his peers. He would not participate in any of the drills or games. He would not respond to me or the other coaches.

No matter what any of us tried, Mitchell had his way of doing things. To use a “coach’s term”… we thought Mitchell was simply un-coachable. This was our first cue as parents that he was not like his peers although at the time. But we didn’t understand why.

Our relationship with CAN began when Mitchell was diagnosed at the age of 9. Our first official act as parents with a child on the spectrum was to register Mitchell for CAN Hockey. I’m not sure who was more excited — us or Mitchell. It became our Saturday morning ritual. We would all get up at 6am, pile into the van to make the trip from Chilliwack to Surrey.

From the moment Mitchell first hit the ice, he was in his glory. You couldn’t wipe the grin off of his face if you tried. 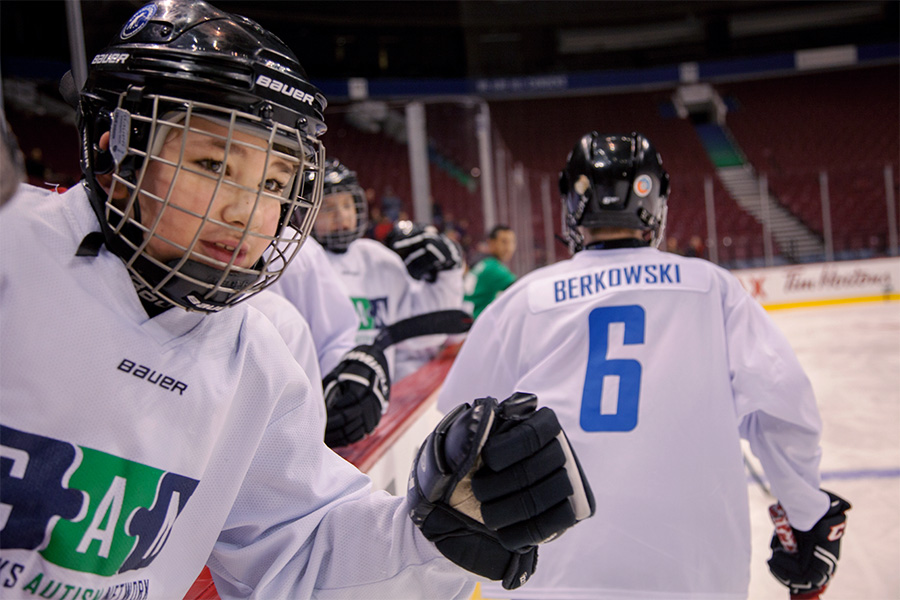 The Saturday morning skate with his team became the most important part of Mitchell’s week. He belonged to a team. He had a team jersey. He had a team jacket. He was now just like his friends at school. He was a hockey player.

The flexibility, structure, and supportive environment at CAN allowed each player to experience hockey in their own way. I cannot put into words what it was like to see my son become a part of a team like this. Mitchell always dreamed of playing hockey. But in addition to making his dreams come true, CAN gave him a second home where he felt welcomed and accepted.

Mitchell’s passion for the game and desire to be the best hockey player was only fueled and further nurtured by the tireless efforts of the amazing CAN staff and volunteers. 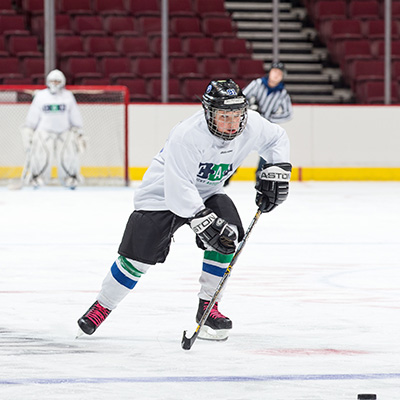 Mitchell progressed significantly in the program. And by the end of his 3rd season, we could see his levels of frustration begin to build. Mitchell was starting to want more from the program than the program was intended to sustain.

As parents, we started to reluctantly face a bitter reality — that it might be best for Mitchell to “graduate” from CAN Hockey and allow another child to embark on the very same journey. But we were unsure if Mitchell had developed a strong enough skill set at CAN to transition to minor hockey with typical peers.

The fall of 2018 might have been the end of Mitchell’s hockey journey had it not been for the support of those around us and the foundation he had built with CAN. Mitchell was also skating with an adaptive hockey program in Chilliwack. The organizer — and a good friend of ours — Ben Champaign kept pushing us and telling us he was ready.

So Ben arranged to have the Chilliwack Minor Hockey Director of Player Development Lee McCaw come out and assess Mitchell. The following week, we registered Mitchell and Lee insisted that Mitchell be placed on his team.

Mitchell’s first season was a complete success primarily due to the coaching staff who did an amazing job of ensuring that Mitchell was well supported through his introduction to competitive hockey. They worked tirelessly to ensure that he was a part of the team and they embraced the spirit of inclusion, proving that hockey was for everyone.

This year marks the start of Mitchell’s 4th season. He is now competing at a level equal to his peers as a 3rd year Midget player. 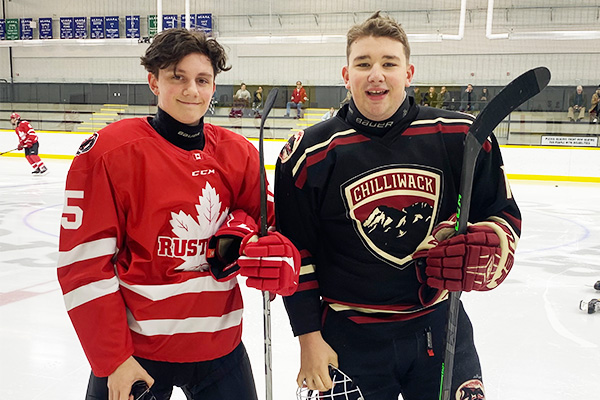 Barriers are made to be broken. Watching Mitchell as he has made his journey has been a very special experience for me. But we could have never done this alone. They say that it takes a village to raise a child and Mitchell’s story is a testimony to this.  Mitchell’s success would not have been possible without the incredible efforts and the amazing support of so many wonderful people.

Canucks Autism Network started it all for Mitchell. CAN started this journey for so many players, including those on Mitchell’s first team. CAN helped 20 kids who were desperate to belong, find a second home wearing the same jersey.

I hope that by sharing Mitchell’s story, you know that CAN has a very powerful impact. That supporters of the cause make a huge difference. To kids like Mitchell, CAN gives them a chance to dream. Canucks Autism Network allowed Mitchell to believe that he CAN be a hockey player.

Supporters of CAN are helping to write the next story… to fulfill the next dream and help ensure more barriers are broken. Isn’t that a beautiful thing?

After Mitch’s dad delivered his speech at the CAN Pro-Am Luncheon, Mitch was given the opportunity to skate alongside NHL Alumni in the CAN Pro-Am All-Star Game two days later. 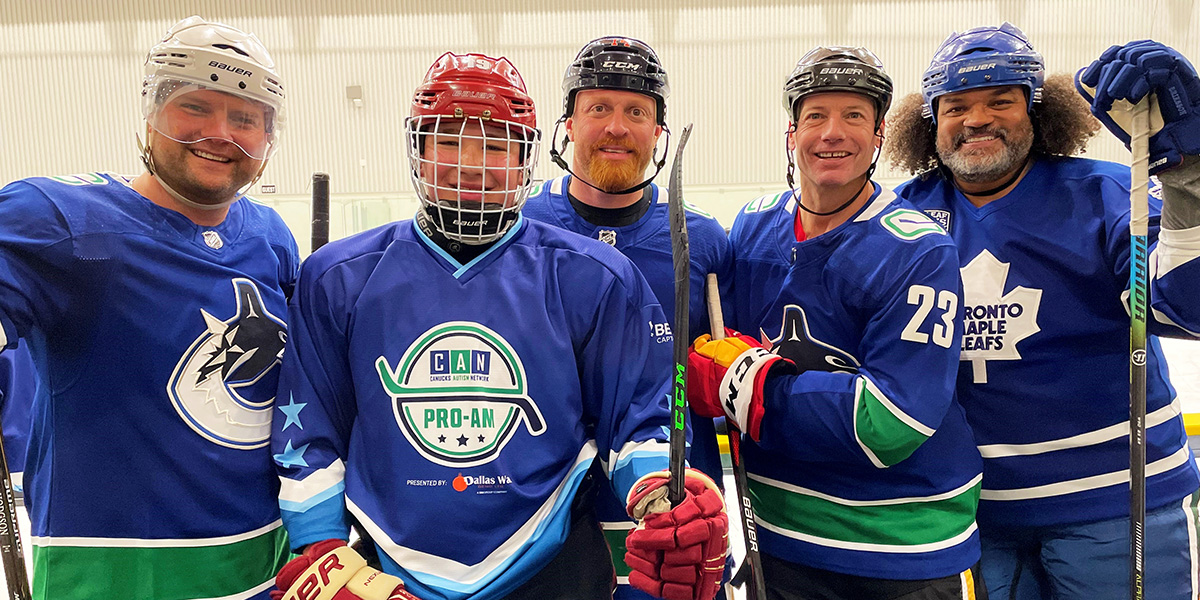 Visit the CAN Blog >

Dear Canucks Autism Network: A letter from a CAN hockey parent

CAN & Sport Surrey give hockey participants a day to remember

CAN removes diagnosis barrier to program access for youth and adults