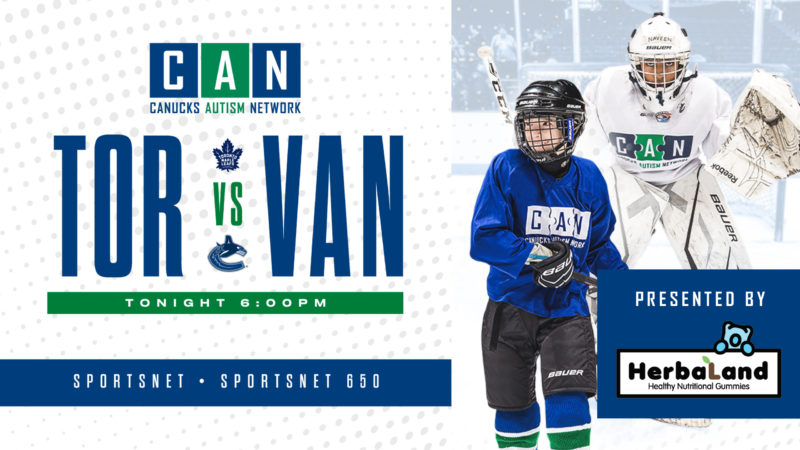 Originally scheduled for March 31, the Vancouver Canucks hosted their World Autism Acceptance Game last night against the Toronto Maple Leafs! Presented by Herbaland, the annual game celebrated the successes of Canucks Autism Network (CAN) participants across BC!

Since our inception, the Vancouver Canucks and Canucks For Kids Fund have been invaluable supporters. From annual funding to autism accessibility initiatives at Rogers Arena, we could not do what we do without their belief in the cause.

This year, Herbaland came alongside the Canucks to celebrate the occasion as the game’s presenting sponsor. Leading up to the game, the local vitamin and supplement gummy producer donated 10% of all sales & 100% of merch sales from March 31 to April 20!

Learn more about Herbaland’s partnership with the Canucks & CAN >

With World Autism Acceptance Month in April, the Canucks highlighted the cause throughout the evening:

What a night! Relive the #Canucks thrilling 6-3 win, with sights and sounds from the @CanucksAutism #AutismAcceptance game presented by @Herbaland. 💙💚 pic.twitter.com/B3P3QjhshP

“Hey Gavin, how do you think you did tonight?” #Canucks #AutismAcceptance pic.twitter.com/F4dMxKye2r

In addition to the in-game features, Sportsnet 650 welcomed a series of Canucks and CAN guests to discuss the cause.

“Having a son with autism, it’s so special to be part of an organization that really wants to help. Whether it’s sports, arts, employment… Having people with autism accepted into every day life is so important.” Listen to the full interview below.

| CAN Founder Paolo Aquilini discussed the inspiration behind the organization:

“Acceptance is recognizing that autism is really part of human diversity. And diversity always makes our community better and more unique.” Listen to the full interview below.

| CAN CEO Britt Andersen discussed how CAN provides opportunity:

“We’re giving kids the opportunity to reach their full capabilities by just giving them a chance. Autism acceptance is encouraging the community to understand that people on the spectrum have unbelievable individual strengths.” Listen to the full interview below.

| CAN Director of Development Ryan Yao shared his excitement for the game:

“We’re reaching more participants & communities every year. But there are so many more families we need to reach out to. Your support means a lot to us as we continue our work.” Listen the full interview below.

Canucks fans can also look to CAN’s “How Swede It Is” Jersey Raffle for a fun way to support the cause. Starting now all throughout Autism Acceptance Month in April, fans can enter to win a trio of signed Canucks jerseys from Daniel Sedin, Henrik Sedin and Elias Pettersson. Tickets start at just $5. Fans can purchase tickets until Saturday, May 1 at 10pm (PST) at canucksautism.ca/raffle.

Must be 19+ and within BC to enter the raffle.

Incredible thanks to the Vancouver Canucks, Canucks For Kids Fund and Herbaland for highlighting the cause and supporting our work year-round.

Former hockey player gives back at CAN Skate

Brayden at the CAN Pro-Am: “The best weekend of my life”