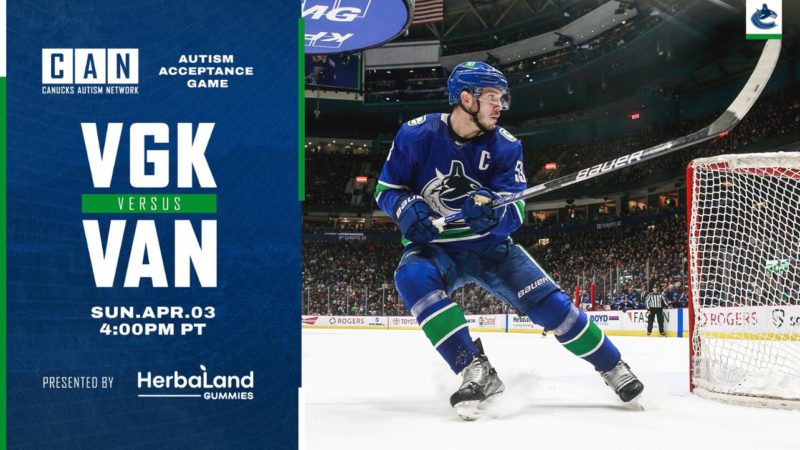 In what is now an annual tradition, the Vancouver Canucks held their Autism Acceptance Game against the Vegas Golden Knights this past Sunday.

And while the overtime loss wasn’t the on-ice result we were hoping for, it was the team’s community impact that took centre stage.

Since 2008, the Canucks and Canucks For Kids Fund have been our most vital supporters. It was 14 years ago that Canucks Autism Network (CAN) was founded by Paolo and Clara Aquilini, whose son Christian is on the autism spectrum.

Once again, the celebration was presented by Herbaland, a local vitamin and supplement gummy producer. After committing to giving 20% of all online sales from March 24-31, Herbaland kicked off the festivities with a $5,000 donation to CAN. 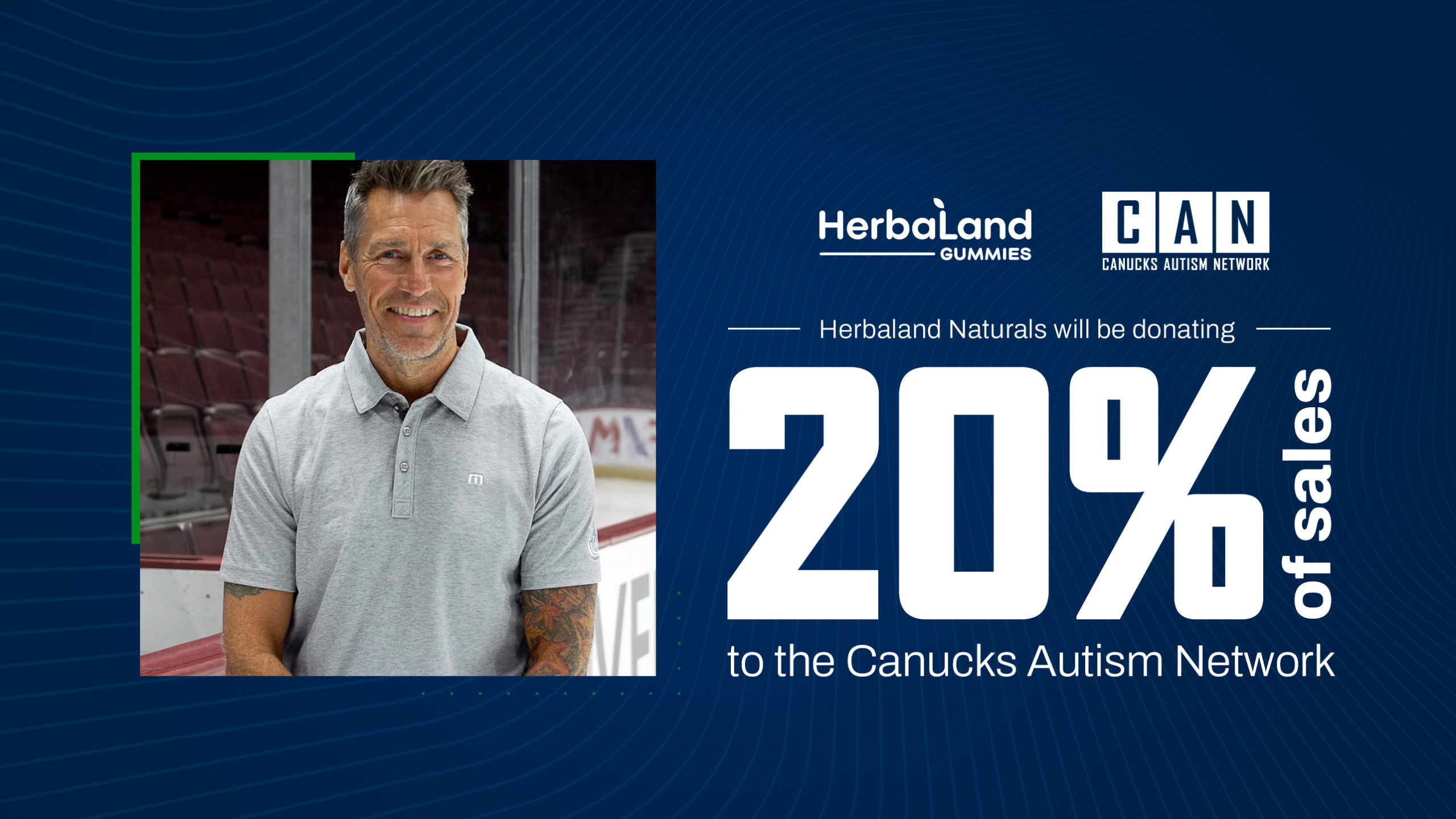 Throughout the evening, the Canucks put the spotlight on CAN participants and the importance of supporting and including individuals on the spectrum in our community.

A former student of the CAN & Sarah McLachlan School of Music program, Gavin has sung at a number of CAN events over the years. Meanwhile, Ryan is a professional announcer and voice over artist who has forged a bond with Canucks PA announcer Al Murdoch.

Gavin was joined at ice level by a couple of young CAN athletes from the Coquitlam Sharks hockey team.

Mikael Raptis (11) was chosen for the Rogers Every Kid’s Dream program, joining the starting lineup at the blueline. Meanwhile, his teammate Kayen DeGoey (10) experienced the pre-game warm up as the Toyota Junior Trainer of the Game. 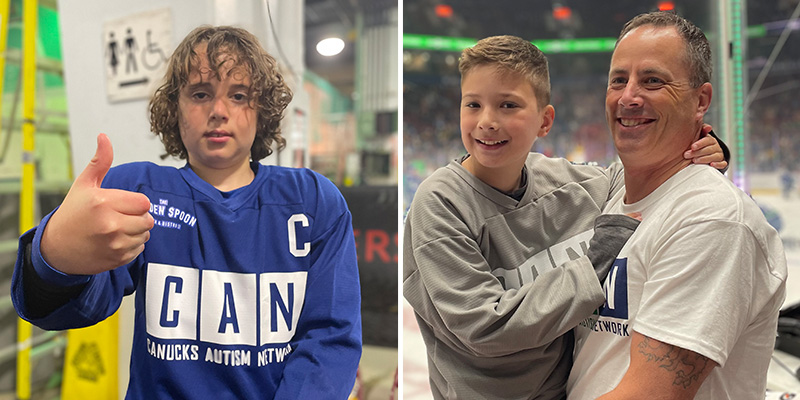 Mikael (left) and Kayen (right) had just completed their first year of CAN Hockey the day before the game.

And just before puck drop, it was Bob Shanks, a 29-year-old on the spectrum, who cranked the BCLC Community Hero Siren. Over the course of 10 years, Bob has single-handedly raised over $300,000 for CAN. A community hero, indeed.

After the 1st period, it was CAN Founder Paolo Aquilini and CEO Britt Andersen‘s turn to highlight the cause.

Paolo sat with Sportsnet 650 host Satiar Shah, whose brother is also on the autism spectrum. On the Sportsnet telecast, Britt joined Dan Murphy to let viewers know how to support the work that CAN does across BC and beyond.

While the evening featured so many different key individuals from CAN, it’s important to note the work that the Canucks do year-round to support autism acceptance.

In addition to providing vital funding through 50/50 and a number of charitable initiatives, the Canucks have partnered with CAN to make resources available at Rogers Arena for any fan on the spectrum (or anyone with sensory sensitivities) who might benefit.

Resources include noise-cancelling headphones, sensory toys, ID bracelets and a Quiet Room available upon request. For Canucks games specifically, fans can also benefit form an activity storybook to help illustrate what to expect. 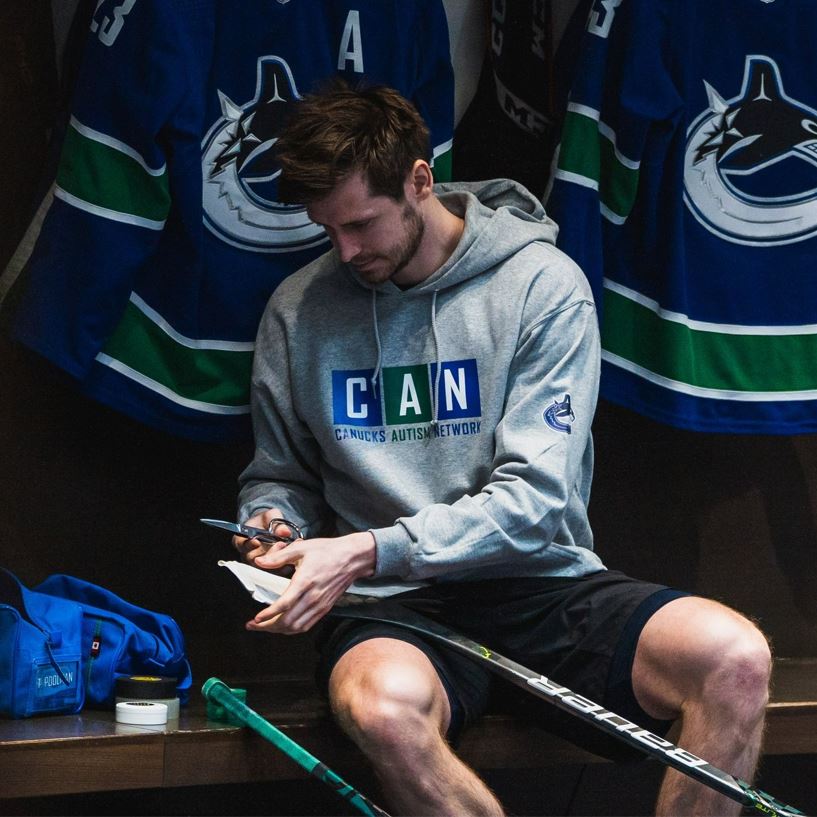 Looking for ways to support the cause, while commemorating the event?

A huge thank you to entire Canucks organization and Herbaland for celebrating autism acceptance this past Sunday and for supporting the cause year-round. It is because of them that we can continue our work across BC and beyond.