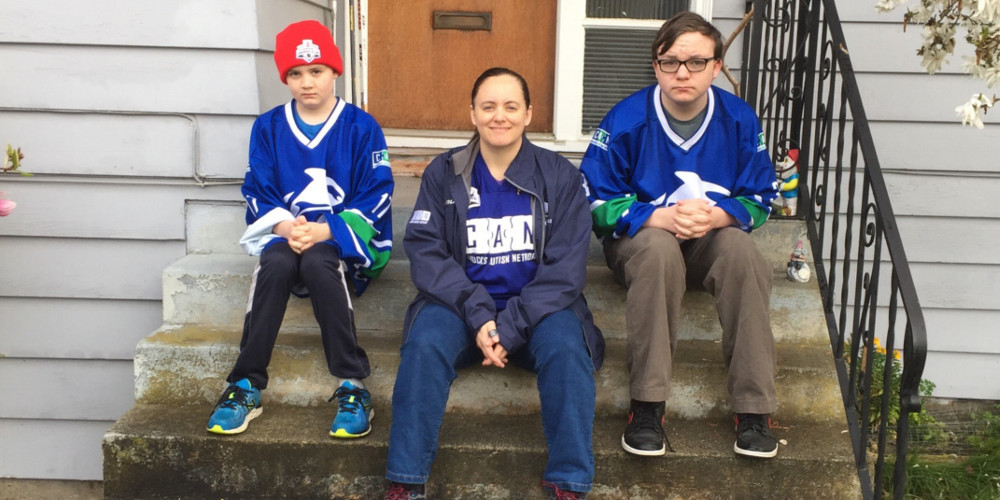 Like many Canadians this month, my family has struggled to come to grips and understand the tragedy in Humboldt.

We put our sticks by the door and left the light on. We wore our jerseys in solidarity.

But unlike many families, explaining the “why” and the “how” to our boys involved a few extra layers.

We are a very proud hockey family. In addition to that, we are also a proud Canucks Autism Network family.

Two of our three boys have autism. Both are hockey players for CAN’s Vancouver Orcas. Our middle son, Oliver, has played wing on the Orcas for four years, while our youngest, Alex, is in his second year – his first as a goalie.

Explaining the tragic events in Humboldt and the many lives lost was met with quiet reflection and tears in our household.

I want to share the story of how my youngest first became a part of this nation-wide hockey community that has come to the forefront this month – and what happened when he was inspired to wear his jersey on April 12.

When Alex first started skating lessons at CAN, he would not even put his foot on the ice. It took three CAN volunteers to support him while kicking, screaming and crying. I was so frustrated because I knew how much he wanted to skate like his brother – to play hockey like his brother.

From that day on, he excelled in the skating program. In full gear, mind you – and without tears and with a new determination. When he was old enough, he too was accepted on CAN’s Vancouver Orcas team and eventually found his calling as a goalie.

That was two years ago. Fast forward to this month when Alex learned the Humboldt Broncos lost most of their team and their two goalies. When it came time to get our jerseys to wear the next day at school, I gave him the choice of his Vancouver Canucks or his Vancouver Orcas jersey.

“I am the goalie and I am going to wear my team goalie jersey,” he said.

I dropped him off at school and lingered on the playground before the bell. I noticed a group of boys from his grade call him over.

I sucked in a breath, not knowing how his Orcas jersey would be perceived in the playground full of Canucks jerseys. As a mother of a son with autism, watching your child have meaningful interactions with other kids can be a rare experience. And a stressful one too.

I watched as Alex’s classmate pointed to the jersey my son was wearing. Alex explained how he plays goalie for CAN’s hockey team.

The other boy unzipped his own coat, showing Alex the jersey he wore for the team he plays for too. He gave Alex a high five and invited him to play with him and the group.

This level of inclusion had never happened before for my son. In that moment, I realized just how much of an equalizer hockey truly is.

You do not have to be a hockey family to be impacted by the events in Humboldt. But in the same way that hockey inspired something so groundbreaking for my son, this past month has shown how hockey can inspire an entire nation to provide a community of support.

On behalf of my hockey family and everyone at Canucks Autism Network, Humboldt remains in our thoughts – we stand with you.

The Humboldt Broncos GoFundMe campaign remains open until midnight tonight (Wednesday, April 18). As per campaign representatives, “an advisory committee is being established to make a recommendation for the allocation of these funds, which will be held in trust until that allocation occurs. Once donations to the GoFundMe are off, people who still want to help can contact the Broncos here: https://humboldtstrong.info/contact/”