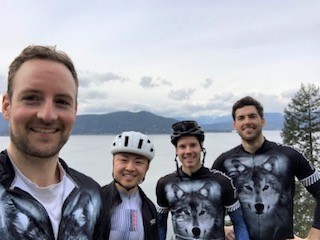 In 2020, when the safest way to see friends in Vancouver was physically distanced and outdoors, the Wolf Pack Cycling Club was formed!

Made up of 10 avid cyclists, we will be riding for the first time as a team in the 2022 RBC GranFondo – a 122 km ride from Stanley Park to Whistler! As the Wolf Pack began training for this ride of a lifetime, we decided to find a local not-for-profit to support.

A team member’s brother, Robbie Cruickshank (aka Bob Shanks), is on the autism spectrum, and an active fundraiser for the Canucks Autism Network. Inspired by Robbie’s leadership, we have selected CAN to be the organization we fundraise for!

With your support, we hope to raise $10,000 for CAN. Together, we can make a difference!