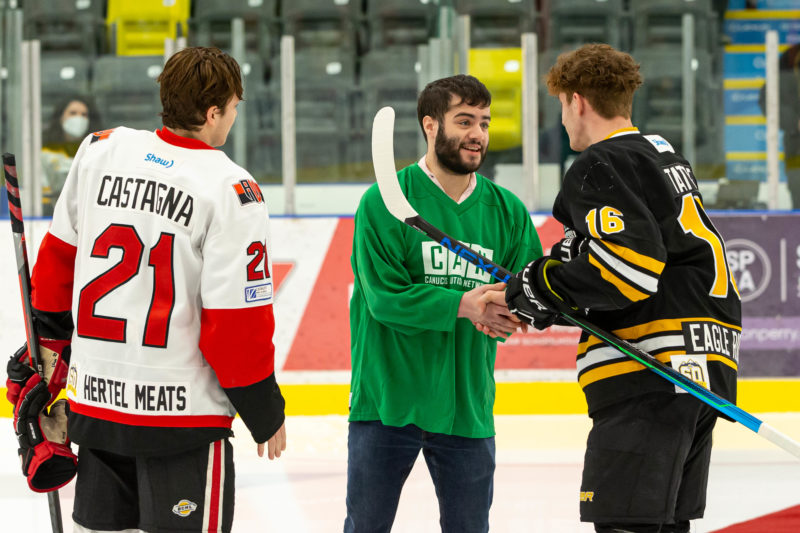 We are so proud to have been selected by the Coquitlam Express for their Shaw Brighter Communities initiative. From now until May 31, 2022, fans can make a $10 donation by texting CQTKIDS to 41010. Shaw will match all text-to-donate contributions! Full details at bchl.ca/shaw.

This initiative comes on the heels of the Express’ first-ever Autism Acceptance Game, hosted this past February.

The Coquitlam Express have been a mainstay in the Tri-Cities since 2001. Playing out of Poirier Sport & Leisure Complex, the BCHL team is committed to fostering inclusion and accessibility in their community.

So when Express Vice President and General Manager Tali Campbell heard that our Coquitlam Sharks youth team played out of the same arena, he was immediately motivated to connect with us.


“Going to a hockey game, we often don’t think about the loud horn, the music, the fans cheering — but for someone on the autism spectrum, it becomes a very sensory rich environment,” said Campbell in an interview with Global News. “And sometimes it becomes too much. It’s long overdue that we become an accessible arena for everyone, including those on the autism spectrum.”

Led by Tali’s belief in accessibility, the Express partnered with CAN to host their first-ever Autism Acceptance Game on Sunday, February 27. Over 100 CAN families were invited to watch a marquee match up against the Alberni Valley Bulldogs.

With CAN’s support, the Express had sensory-friendly kits on-hand and a designated Quiet Room for any fan who might benefit. Both resources can be accessed at any Express home game by visiting the merchandise sales window. 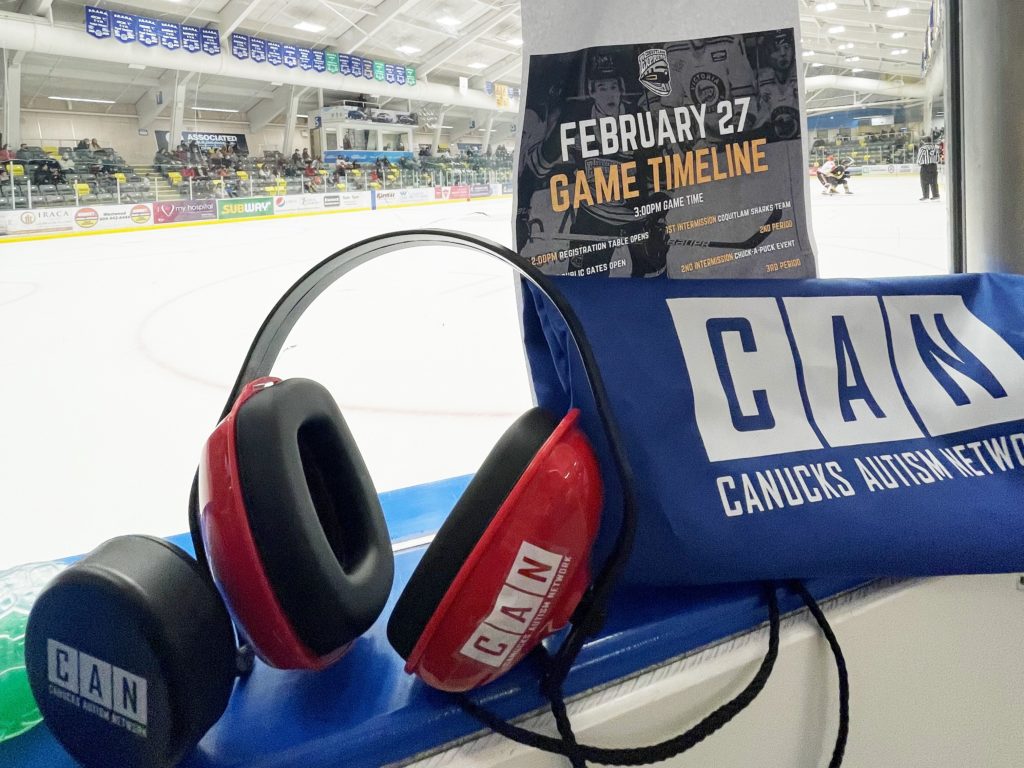 Throughout the afternoon, the game showcased a number of key autistic voices, figures and talents within the CAN community. A couple of CAN participants expertly shared the mic, as Ryan Chilton (28 years old) announced the starting lineup and Jayden Weiss (12) sang the national anthem. 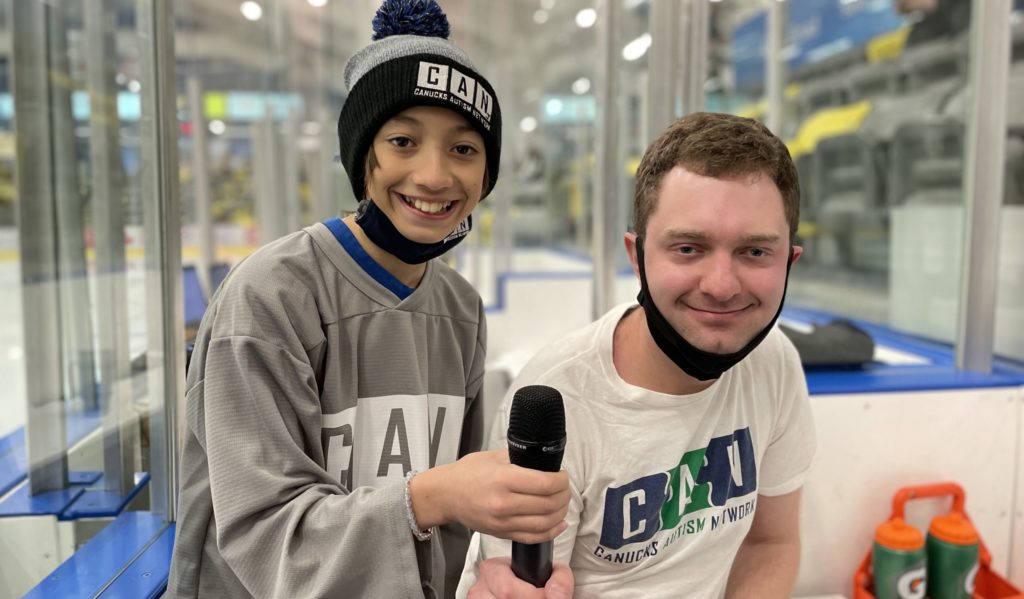 Meanwhile, the ceremonial puck drop was performed by Christian Aquilini, the young man who inspired Paolo and Clara to found CAN in 2008. 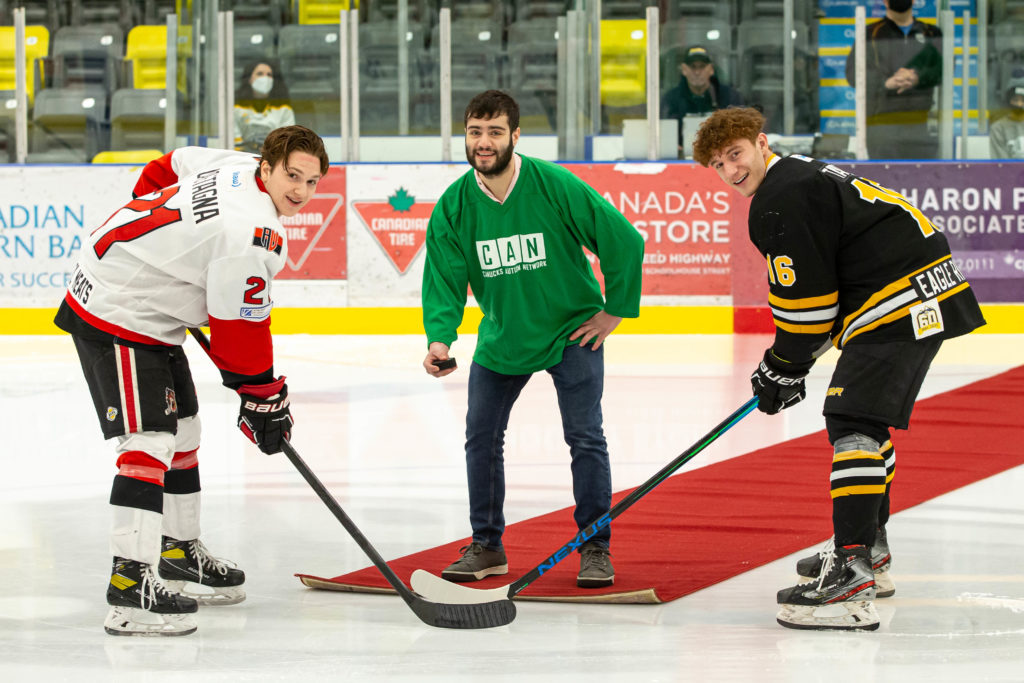 Canucks Co-Owners Paolo & Clara Aquilini founded CAN with a desire to create more opportunities for individuals on the spectrum like Christian.

And at first intermission, the young members of the CAN Coquitlam Sharks showcased their talents during an intrasquad scrimmage. 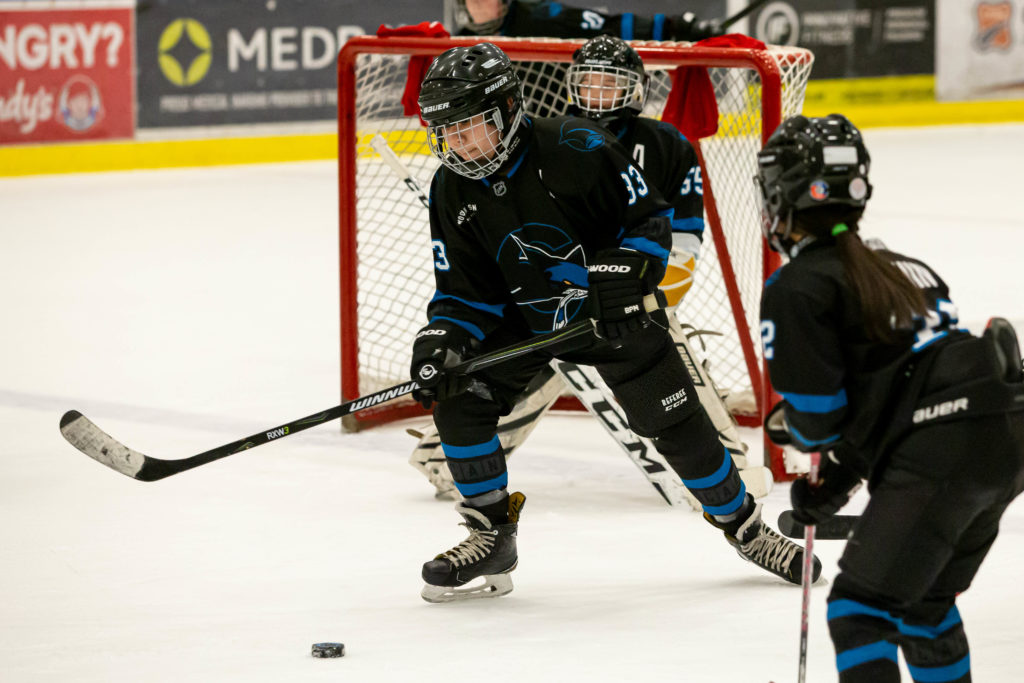 The Coquitlam Sharks team also debuted their brand new jerseys at the game!

As the focus shifted back on the BCHL contest, the hundreds of CAN members in attendance were treated to a 3-2 win, as the Express staved off a late push from the visiting Bulldogs. But the festivities didn’t end at the final buzzer.

With the Express players in good spirits from their win, each CAN family was invited onto the ice for a post-game skate with the victors! It was a true joy to see this team of junior athletes bond with our young CAN players.

And for any non-hockey playing members who were looking to steady themselves on the ice, an Express player was never far to lend a helping hand. 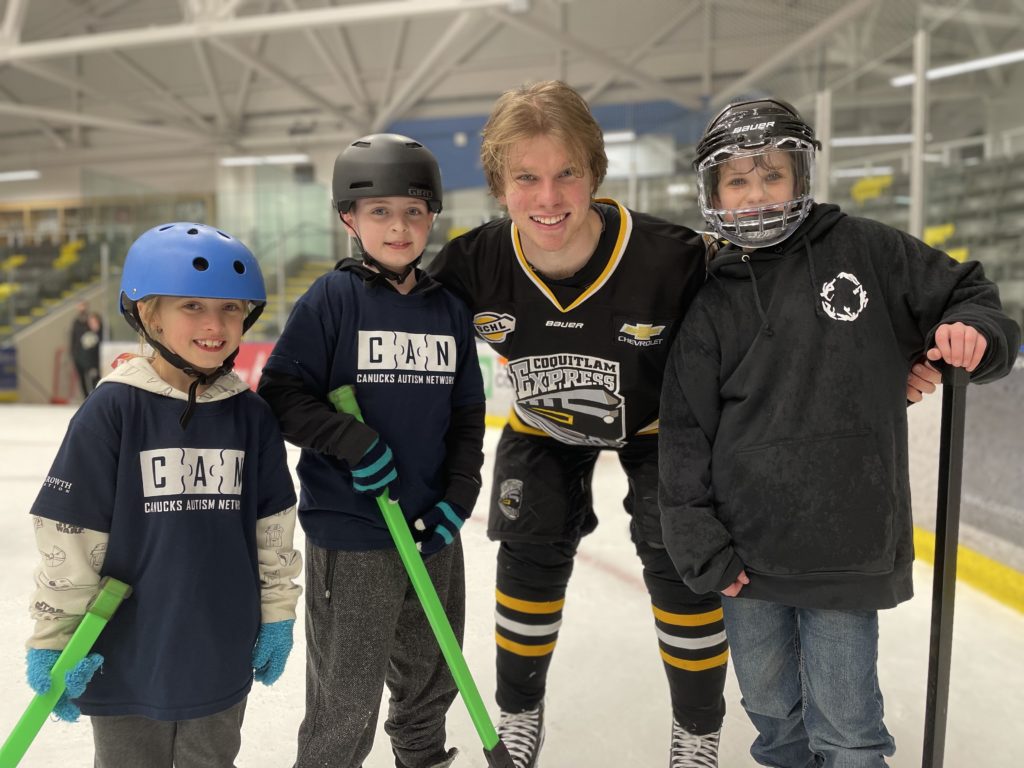 We like to think that the Express had some added motivation to connect with our participants that afternoon. It was actually behind the scenes that perhaps one of the most inspiring moments of the day took place.

Sylvain Formo, a young adult on the spectrum, was invited to speak to the entire Express team. He shared about his experience growing up as a goalie, before joining the CAN staff team as a coach. 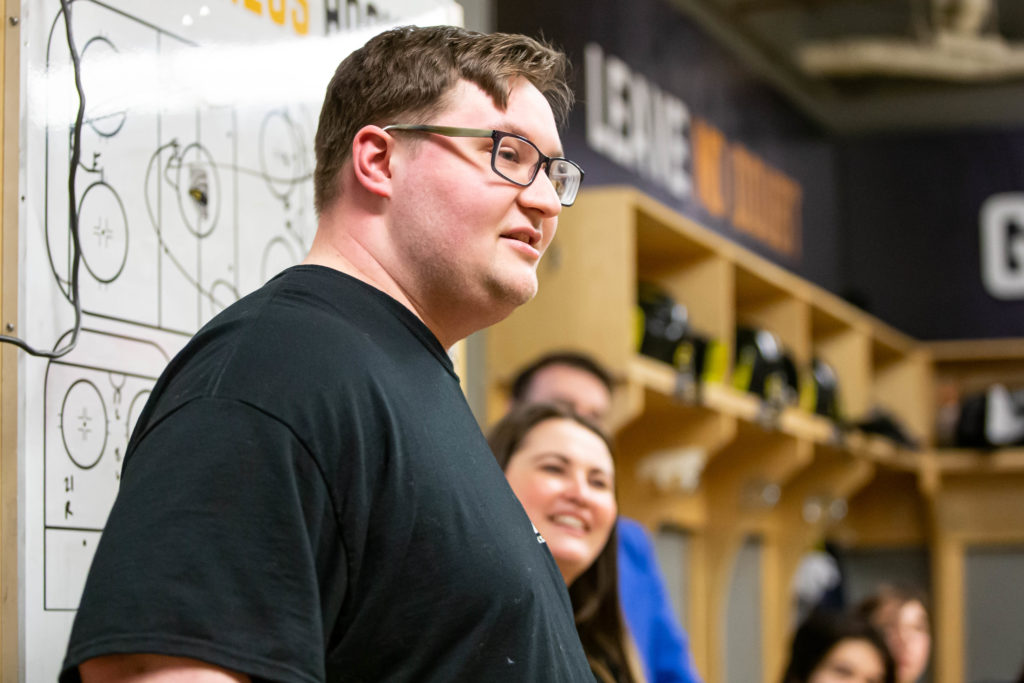 “I know you’ll be with the CAN kids after the game during the family skate,” said Sylvain. “Just take a second to get to know each kid. Each kid is different and you’ll probably learn something you never knew before.”

Based on the beaming smiles that we saw on both the Express players and the CAN families’ faces, it’s safe to say that they took Sylvain’s words to heart.

“We’re thankful to Canucks Autism Network for working with us on this event,” said Tali. “I’m learning. My staff are learning. And our players are learning.” 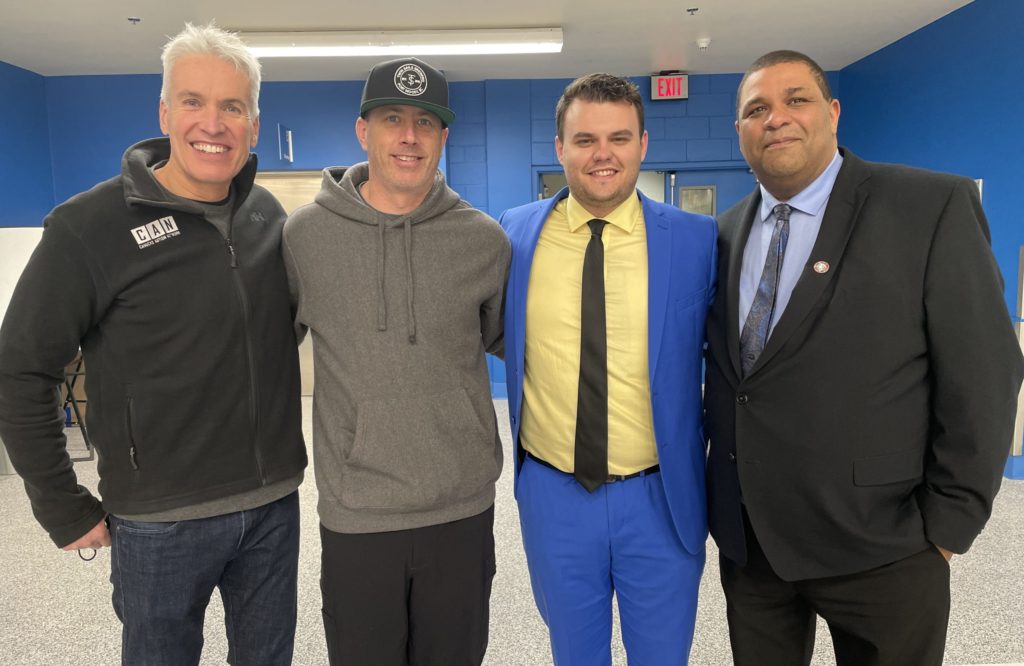 At CAN, our vision is for every individual on the spectrum to be understood, accepted, and supported in all community spaces. Thank you to Tali and the entire Coquitlam Express organization for taking meaningful steps in this direction.

CAN & YVR: Launching a community of support