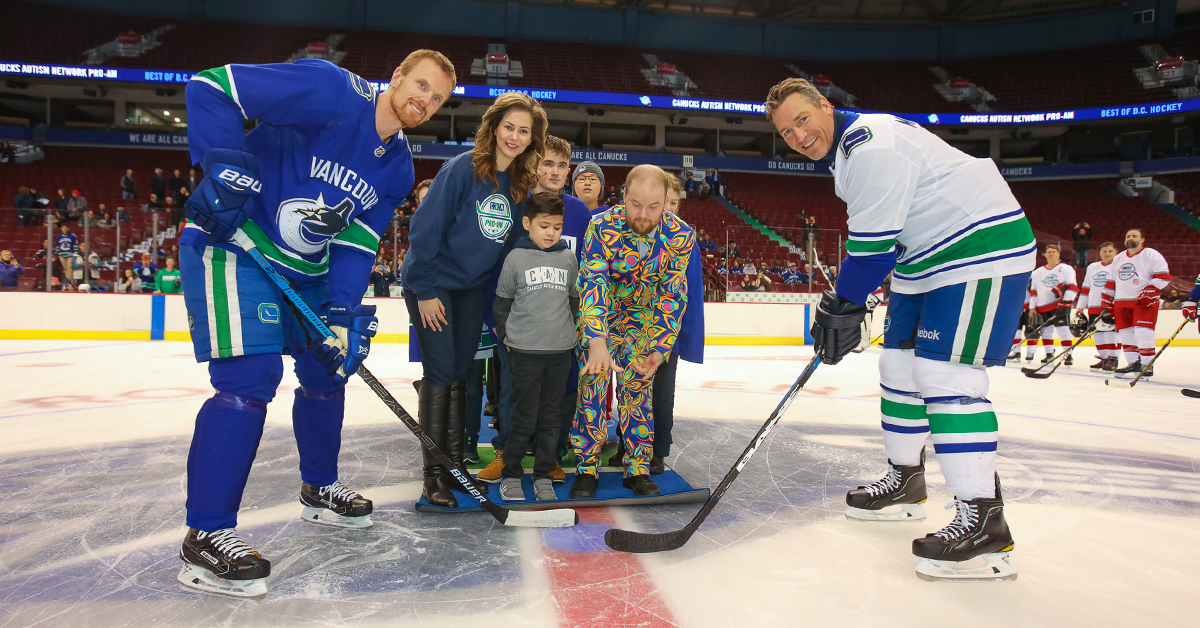 “This was the best weekend of my life. And I got married on a weekend.”
– Jeff, CAN Pro-Am participant

After months of tireless fundraising for Canucks Autism Network (CAN), 16 rec and corporate teams laced up for the inaugural CAN Pro-Am Hockey Tournament, presented by Modern Green Canada. Featuring 19 NHL Alumni, including the surprise addition of Vancouver Canucks legend Daniel Sedin, it was truly a weekend to remember.

Each team’s journey began with a pledge to raise at least $20,000 for CAN. By the time the dressing rooms at Rogers Arena were cleared, the CAN Pro-Am had raised an incredible $575,000 to support programs for individuals and families living with autism across BC.

The weekend festivities kicked off Friday afternoon in the Rogers Arena Captains Room with the Hotstove Luncheon, sponsored by Zerto. VIP guests were treated to decadent family-style fare while listening to unheard stories from Canucks Alumni spanning all three of the team’s Stanley Cup Final runs (1982, 1994, and 2011).

Brought in to moderate the panels was Sportsnet 650 personality Scott Rintoul. In addition to hosting the exclusive Q&A, Sportsnet 650 was live on location broadcasting for the duration of the weekend.

That evening, business attire was swapped for jeans and jerseys, as players and sponsors headed to the Imperial Vancouver for Draft Night, sponsored by Odlum Brown. Having raised a tournament-leading $75,667, the Odlum Brown Bulls lifted the inaugural “CANley Cup” and earned the right to select first overall. With the top pick, they selected former Canucks winger Raffi Torres. 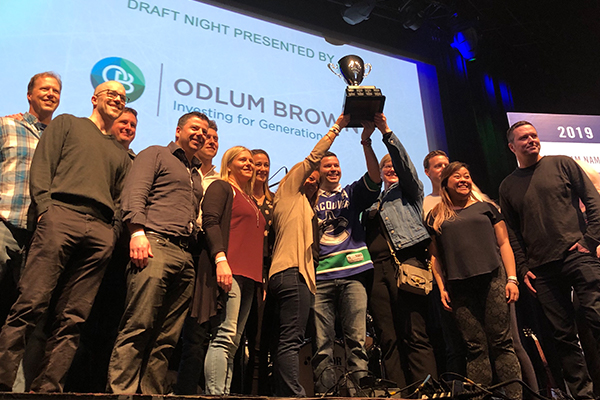 In true NHL style, the showstopper on Draft Night was a surprise trade. Comprised of five CAN parents, the Healthy Scratches swapped their second overall pick to the tenth-ranked fundraising team in exchange for a $5,000 donation to CAN.

With each team boasting a former NHL star on their roster, the stage was set to hit the ice on Saturday morning. Over the next two days, CAN Pro-Am players lived out their wildest hockey fantasies, competing alongside the likes of Daniel Sedin, Josh Gorges, Kirk McLean and more.

While there were many close games on Saturday, the action at Doug Mitchell Thunderbird Sports Centre was highlighted by a thrilling shootout win from Dave Babych and the Healthy Scratches. Featuring a CAN parent in goal, Lee McCormick went head to head against former Canucks 30-goal scorer Mikael Samuelsson and came out on top. 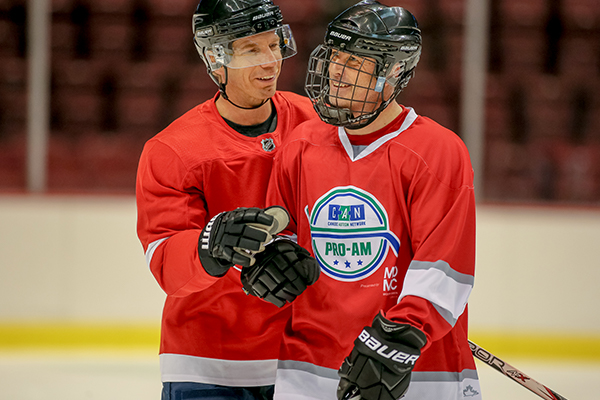 For CAN parents like Lee and John Carinha, the tournament experience was especially impactful. “The CAN Pro-Am has brought together a group of strangers with NHL greats for a common goal,” said John. “And it has nothing to do with the score of the game. We’re all here to highlight the opportunities that CAN offers the autism community. And most importantly, to fundraise for them to continue growing their reach.”

With games transitioning to Rogers Arena on Sunday, the tournament culminated in a highly-anticipated All-Star Game that showcased the top 22 individual fundraisers and eight NHL Alumni. Despite names like Daniel Sedin, Brendan Morrison, and Cliff Ronning on the ice, players and spectators were reminded of the real stars of the weekend during the pre-game ceremony.

Top fundraiser Bob Shanks was joined by 10-year-old CAN participant Noah Zanatta and Carleen Pauliuk from Presenting Sponsor Modern Green Canada to drop the ceremonial puck between Kirk McLean, and Daniel Sedin. Then, with a number of CAN hockey participants lined up at centre ice, Daniel shook the hand of each of the aspiring youth athletes. 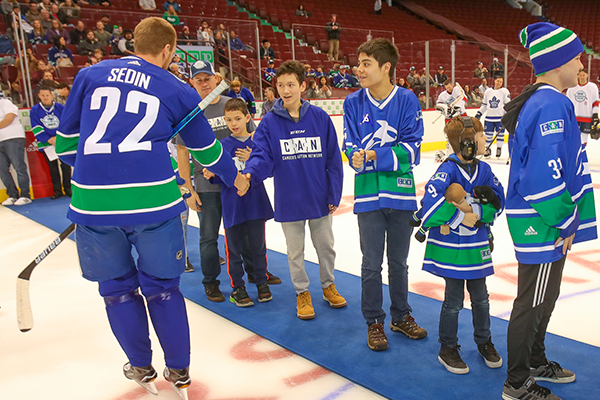 Like every pre-game ceremony at Rogers Arena, players were invited to remove their helmets for the singing of the national anthem. Taking the mic was 9-year-old Jayden Weiss, a member of the CAN/Sarah McLachlan School of Music program. Incredibly, Jayden sang ‘O Canada’ by heart, just four years after being unable to speak

Needless to say, the CAN Pro-Am was full of inspiring moments that are sure to bring rec and corporate teams back year after year. In an interview with Sportsnet 650 after the tournament, former Canucks star Brendan Morrison reflected on the impact that the CAN Pro-Am had on everyone involved.

“There was such positive energy all weekend,” Morrison shared. “Guys were talking about how they can’t wait until next year and how it’s going to grow and get bigger, which is huge for CAN.”
The collective fundraising effort of each team was bolstered by support from community sponsors, most notably the tournament’s presenting sponsor, Modern Green Canada. 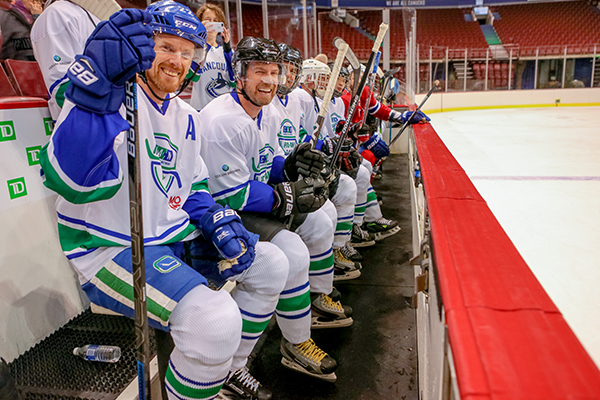 Daniel Sedin returning to Rogers Arena for a cause! | Photo: Paul Yates

“This weekend was truly every hockey fan’s dream,” said Raymond K. Li, President of Modern Green Canada. “All the NHL Alumni were phenomenal and every player was smiling from ear to ear all weekend long. As a real estate developer and the Presenting Sponsor, we are honoured to partner with Canucks Autism Network to showcase our shared commitment to our community. Thank you to everyone involved for making this inaugural event such a success.”

With $575,000 raised, CAN Pro-Am players and supporters can take pride that their participation has helped ensure that individuals with autism will also have the opportunity to enjoy the thrill of sports province-wide.