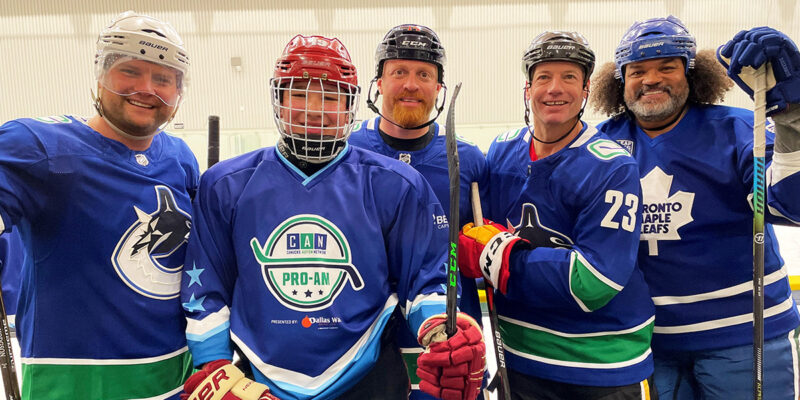 The Canucks Autism Network (CAN) Pro-Am Hockey Tournament started four years ago from a dream. Building off our provincial community’s deep love of hockey, we envisioned a fundraising event that united NHL Alumni with rec players in support of the cause.

Our inaugural tournament in 2019 featured Canucks legend Daniel Sedin and raised a remarkable $575,000. Year after year, tourney supporters and participants raised more and more — with the top fundraising team earning their first choice of NHL Alumni. Now in its fourth year, the 2022 edition achieved another record-setting amount. 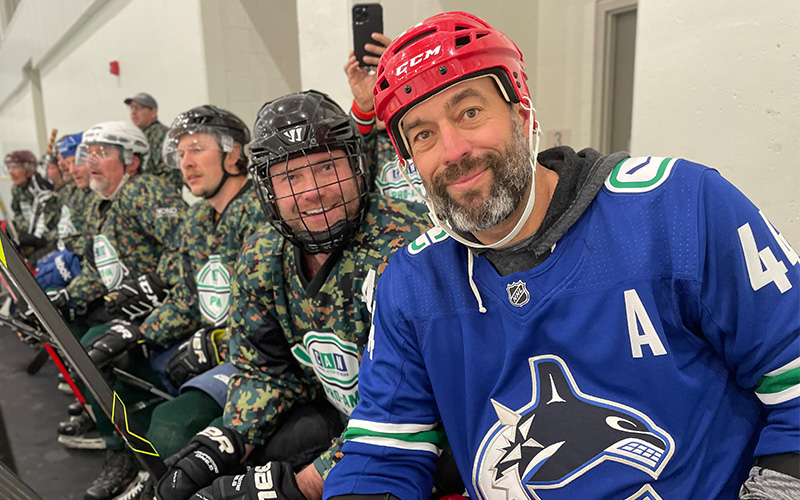 Held November 18-20, players came from across the Lower Mainland community and beyond for a weekend of hockey, fun and camaraderie. Corporate teams like the Beyonders, Odlum Brown Bulls & Team Sportsnet were comprised of staff from local businesses who support the cause, while teams like the Port Moody Oldtimers and Team Bob Shanks filled their roster with hockey buddies from local rec leagues.

Regardless of their background, each team signed up in 2022 with a common goal — to raise vital funding for CAN programs, training and community engagement initiatives. With a minimum team goal of $20,000, our top fundraising squads absolutely went above and beyond.

For the second consecutive year, The Constructors topped the standings with a remarkable $132,331.

Meanwhile, the top fundraising individual should come as no surprise to anyone.

If you’ve been around any major CAN fundraiser in the past decade, then you know the name Bob Shanks. This past year, Bob achieved a remarkable milestone — $250,000 raised for CAN, all-time. In addition to being featured in The Province, Bob was awarded the BC Medal for Good Citizenship.

So of course, when the individual fundraising standings were finalized, it was Bob Shanks who topped the list once again with $39,615 raised. With thanks to his longtime friend and CAN supporter Paddy Mahony, Bob hosted a pub night fundraiser at Mahony’s Tavern and was tireless in collecting donations from friends, family members and coworkers.

The weekend kicked off with the CAN Pro-Am Luncheon, sponsored by ICONIX Waterworks, at The Westin Bayshore.

Hosted by Satiar Shah of Sportsnet 650, VIP guests were treated to an on-stage Q&A panel with members of the Canucks’ 2011 team — Torres, Jannik Hansen, Mason Raymond and Cody Hodgson. 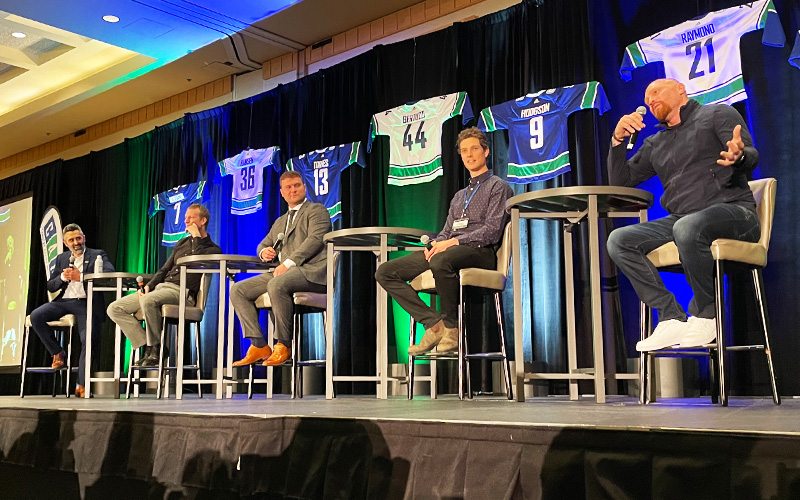 In addition to the on-stage entertainment, all 18 participating NHL Alumni were seated among our VIP guests.

Despite that group of former pros on-stage, it was CAN hockey dad Gary Bryant who stole the show. Gary shared how he watched his son Mitch fulfill his dream of being a hockey player. Through CAN’s hockey program, Mitch gained the skills and confidence necessary to eventually graduate to the Chilliwack Minor Hockey Association, where he currently plays at the U18 level.

There wasn’t a dry eye in the room.

“Canucks Autism Network allowed Mitchell to believe. [This tournament] plays an important role in writing the next story — in fulfilling the next dream. By supporting CAN, you can help ensure that more barriers are broken. And isn’t that beautiful thing?” 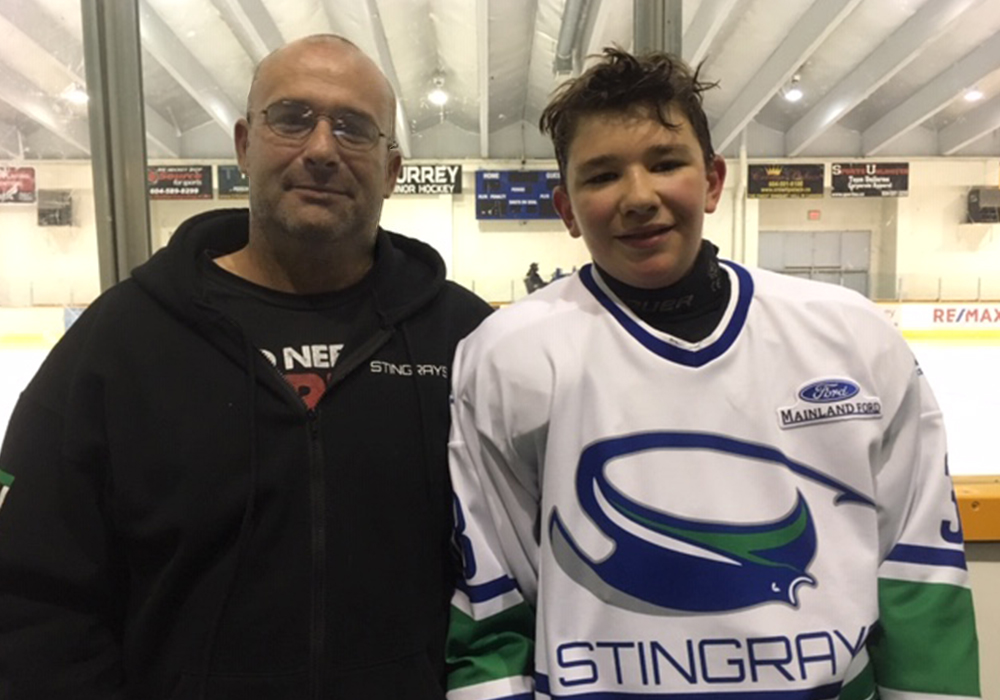 The Luncheon was immediately followed by an All-Star Reception where Gary and Mitch were welcomed as special guests. Sponsored by NOX, El Santo and Casamigos, the private reception was held exclusively for our top 24 individual fundraisers to enjoy a tequila tasting and tapas experience with all 18 NHL Alumni in attendance.

The evening was finally was topped off by Draft Night, sponsored by Sportsnet 650. The draft order was set based on the final team fundraising standings. With The Constructors holding the top spot, Bertuzzi became the first repeat first overall selection in tournament history (he was previously selected first in 2020). Rounding out the top three, the Beyonders selected Martin Gelinas, while the Ice Grizzlies welcomed Raymond onto their team.

“We need events like the CAN Pro-Am,” Bertuzzi shared. “I was fortunate to play in Vancouver for 10 years and it’s always so great coming back and seeing guys like Brendan Morrison and Brad May. The fundraisers are always so awesome to play with and the amount of money that has been raised is going to such a great cause.”

Heading across the Fraser, we finally dropped the puck on the 2022 tournament the following morning at the North Surrey Sport and Ice Complex.

With support from the City of Surrey and Sport Surrey, each team played two games on Saturday and one game on Sunday. 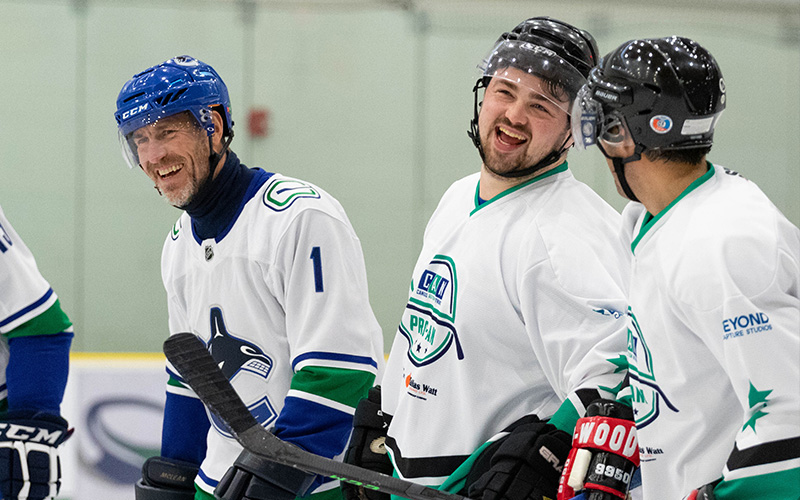 Canucks Alumni Kirk McLean alongside a pair of fundraisers at the CAN Pro-Am All-Star Game.

To cap off the on-ice action, our top 24 fundraisers were treated to a bonus game on Sunday afternoon with six NHL Alumni joining each team. The ceremonial puck drop was preceded by a couple of key Autistic voices from the CAN community. Ryan Chilton was back at the PA mic introducing each player, while CAN & Sarah McLachlan School of Music student and CAN hockey participant Kaiden esang the national anthem.

And with Gary and Mitch kicking off the weekend with their incredible story about CAN’s impact, it was only appropriate that Mitch was invited onto the ice for the feature game. Suiting up for Team Blue, he was joined by former CAN hockey teammate Brandon Carinha. Both Mitch and Brandon scored a goal while skating alongside the likes of Brad May, Brendan Morrison, Hansen and Torres. 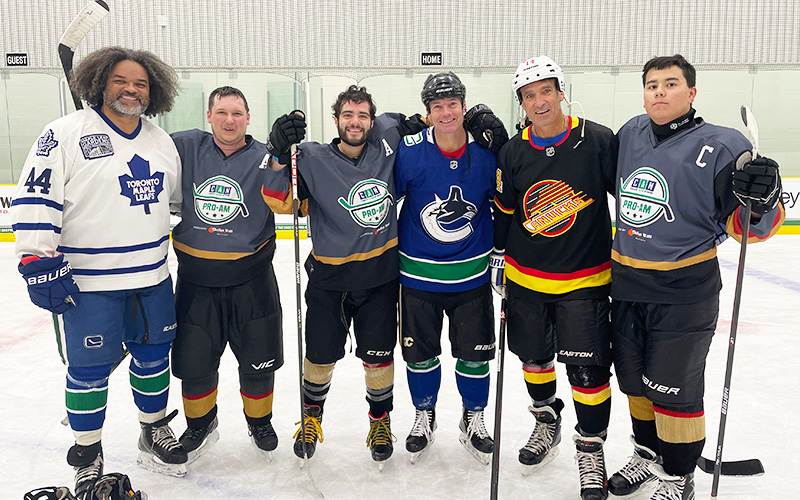 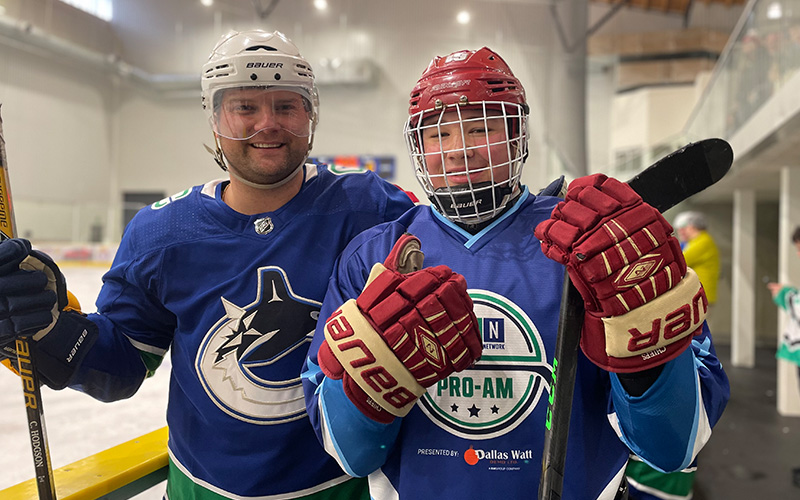 It was a meaningful end to an unforgettable weekend. Participating rec players and NHL Alumni got to see first-hand how CAN helps our participants achieve their dreams. And to quote CAN hockey dad Gary, “Isn’t that a beautiful thing?”

Huge thanks to all the players, coaches, donors, sponsors and supporters who make this tournament possible each and every year.

Learn more about the tournament: canproam.ca

Thank you to all our CAN Pro-Am sponsors

Breaking barriers: From CAN to Chilliwack Minor Hockey

CAN & Sport Surrey give hockey participants a day to remember

Coquitlam Express welcome hundreds in the stands & on the ice