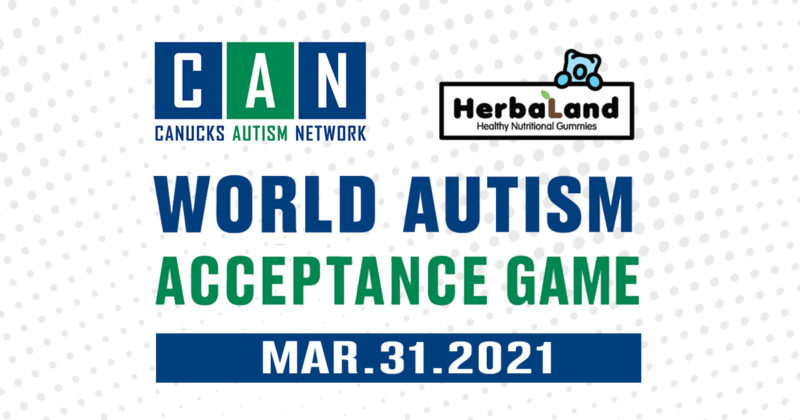 For the 3rd year, the Vancouver Canucks are hosting their World Autism Acceptance Game to support the cause and celebrate the successes of Canucks Autism Network (CAN) participants across BC. Presented by Herbaland, the puck drops on this commemorative game tomorrow night at 7:30pm against the Calgary Flames.

Since our inception, the Vancouver Canucks and Canucks For Kids Fund have been invaluable supporters. From annual funding to autism accessibility initiatives at Rogers Arena, we could not do what we do without their belief in the cause.

With World Autism Acceptance Month taking place in April, the game is an annual tradition at Rogers Arena. Both CAN and the Canucks will be highlighting the cause throughout the day with a number of initiatives: 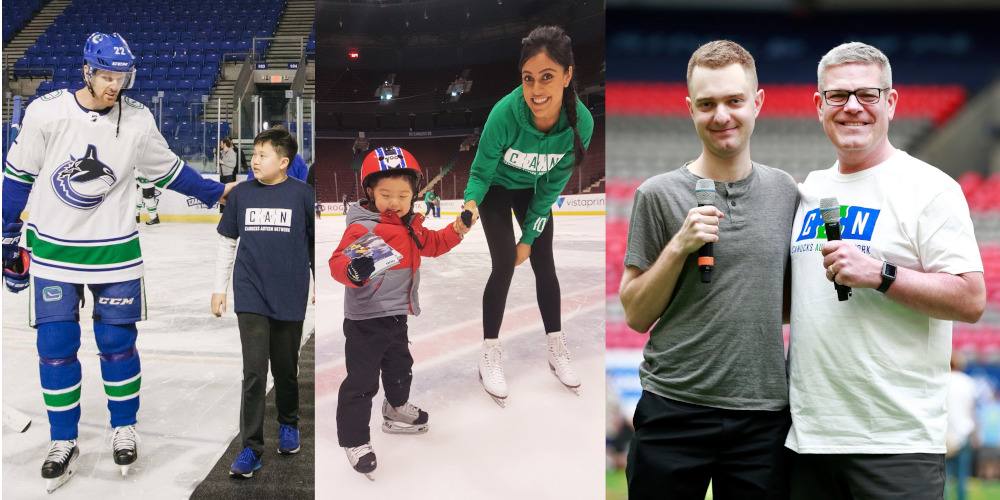 From left to right: Daniel Sedin congratulates Gavin at the 2020 CAN Pro-Am, Nidhi supports a young skater at our 2019 Rogers Arena Family Skate & Ryan shares the mic with Al Murdoch at 2018 CAN Sports Day.

This year’s Autism Acceptance Game is presented by Herbaland, a Canadian nutritional vitamin and supplement gummy producer for kids, adults and athletes. From March 31 to April 14, Herbaland is donating 10% of all gummy sales an 100% of all merch sales to CAN. Canucks fans and CAN supporters can learn more and buy now at herbaland.com.

Canucks fans can also look to CAN’s “How Swede It Is” Jersey Raffle for a fun way to support the cause. Starting now all throughout Autism Acceptance Month in April, fans can enter to win a trio of signed Canucks jerseys from Daniel Sedin, Henrik Sedin and Elias Pettersson. Tickets start at just $5. Fans can purchase tickets until Saturday, May 1 at 10pm (PST) at canucksautism.ca/raffle.

Must be 19+ and within BC to enter the raffle.

Don’t miss the Canucks’ World Autism Awareness Game on Wednesday, March 31! Tune in at 7:30pm on Sportsnet Pacific or Sportsnet 650. View the pre-game notes on canucks.com.

Former hockey player gives back at CAN Skate

Brayden at the CAN Pro-Am: “The best weekend of my life”