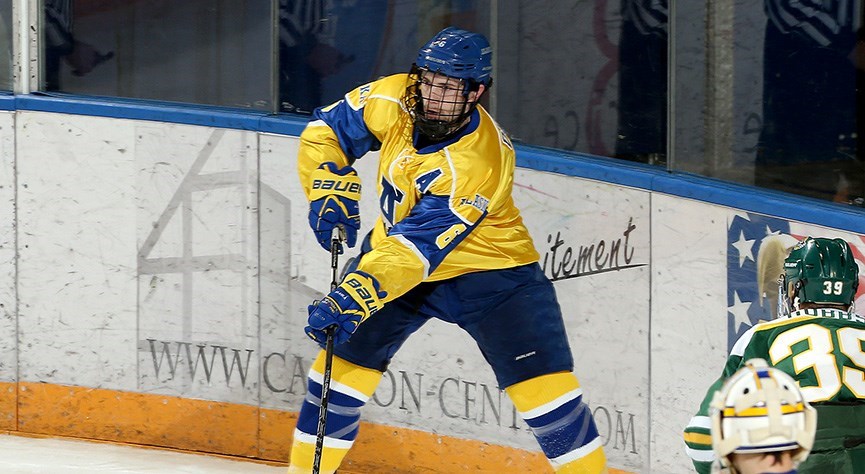 In junior and college, he competed against current NHL stars like Tyler Bozak, Kyle Turris and Jake Gardiner. After turning pro, he traveled the world and played in the United States, Hungary and France.

Though he is now retired, Michael hasn’t come close to hanging up his skates. Since settling back home in Surrey, he has found a new calling on the ice as a Canucks Autism Network (CAN) volunteer.

Every Wednesday evening, he laces up at Cloverdale Arena to support CAN participants in our skate program.

What motivates him to give back?

“I love being on the ice,” Michael explained. “And CAN has allowed me to pass on my skills and joy of skating to the kids.”

His enthusiasm has helped countless CAN participants develop confidence on the ice and a shared love of skating. The CAN staff in Cloverdale have taken notice.

Whenever they encounter a participant who may need some extra motivation and encouragement, the staff are quick to pair them with Michael.

“The kids gravitate to him because he’s got such an advanced skill set on the ice,” said one of our CAN skate coaches. “But he’s been able to support them in ways that show a natural ability to connect with our participants too.”

While April 7-13 marks National Volunteer Week in Canada, it is also Autism Awareness Month. Like many CAN volunteers, Michael came to us with no experience supporting children with autism. But through a clear passion, desire to give back and guidance from CAN staff, Michael has developed the understanding of autism necessary to make a lasting impact on our participants.

“It only takes an hour out of my week,” Michael shared. “And to be able to put a giant smile on a child’s face – that’s something special. Getting to build relationships with the children and seeing not only their skating skills improve, but also their confidence and interpersonal skills, has been tremendously rewarding.”

Outside of CAN programs, Michael is starting a career as a firefighter with the City of Delta. He will be joining a first responder community in BC that is becoming increasingly aware and accepting of individuals with autism, as well. This past January, CAN launched a free and online training tool for first responders. In the three months since, over 600 fire fighters, police officers, paramedics, search and rescue officers and more have completed the training.

Michael will be starting his new role with valuable hands-on experience and is eager to utilize his newfound understanding of autism.

“I have gained so much knowledge and so many communication skills volunteering with CAN,” Michael said. “As a firefighter, it is extremely reassuring that I can use my knowledge about autism to respond to calls involving individuals on the spectrum.”

As an organization, we are uplifted that volunteers like Michael will continue to support the autism community long after their time in our programs.